JAKARTA - The death toll of the 7.4-magnitude earthquake in Central Sulawesi that also spawned a tsunami jumped to 405 on Saturday (Sept 29), as the Indonesian navy deployed several Hercules logistic planes to bring in technicians, supplies and rescue teams to rescue survivors of the natural disaster.

The dead included a young air traffic controller (ATC) who  stayed behind to guide the last flight off Palu city.

“This is only in Palu, we have not receive any data from Donggala,” said  the agency’s spokesman Sutopo Purwo Nugroho on Saturday.

No information has yet emerged on the deaths and damage in the worst-hit areas in Donggala Regency, which is a 30-minute drive from Palu, as communications were cut off.

“When the (tsunami) threat arose yesterday, people were still doing their activities on the beach and did not immediately run and they became victims,” Dr Sutopo said at a news briefing in Jakarta.

The earthquake struck at 6.02pm local time, with an epicentre located 26km north-east of Donggala Regency, Central Sulawesi province, and a depth of 11km.

The tremor was more powerful than a series of quakes that killed hundreds on the Indonesian island of Lombok in July and August.

The provincial capital of Palu, about 70km south of the epicentre, was also hit by an estimated 3m tsunami.

“We need to get the airport operational again earlier than planned, hopefully by noon today.”

The golden moment, or golden hour, is when quake and tsunami victims have the highest chance of surviving if assistance or prompt medical treatment is provided.

Dramatic video footage filmed from the top floor of a parking ramp in Palu, nearly 80km from the quake's epicentre, showed waves of water bring down several buildings and inundate a large mosque.

People living hundreds of kilometres from the epicentre reported feeling the massive shake.

Pictures supplied by the authorities showed a badly damaged shopping mall in Palu where at least one floor had collapsed onto the storey below, while other photographs showed major damage to buildings and large cracks across pavements. 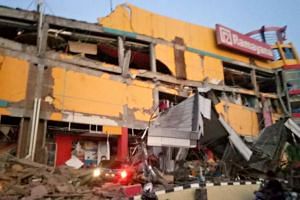 AirNav Indonesia managed to  install markers on a 2km undamaged stretch of tarmac on Saturday for aircraft to land with emergency supplies and  personnel.

A total of 13  planes  and helicopters have managed to land at the Mutiara SIS Al-Jufrie airport to deliver basic necessities, power generators, and medical teams to assist local authorities.

They also include aircraft to evacuate those seriously injured for medical treatment and the body of the air traffic controller who succumbed to his injuries on Saturday, said AirNav spokesman Yohanes Harry Sirait.

Mr Anthonius Gunawan Agung, 21,  was a flight navigation service personnel and the ATC on duty at the Mutiara SIS Al-Jufrie airport during the time of the earthquake.

“When the earthquake occurred, he had just cleared a Batik Air flight for take-off and waited for the aircraft to be safely airborne before finally leaving the ATC cabin tower,” said Mr Yohanes.

After the flight was cleared, Mr Anthonius found himself trapped and was forced to jump from the four storey-tall tower as the tremors grew stronger.

As a result, he suffered a broken leg and other internal injuries, and died while he was waiting to be evacuated by helicopter.

On Saturday, AirNav director Novie Riyanto said Mr Anthonius will be given a double promotion posthumously for his dedication.

Dr Sutopo said electricity in many parts of Palu was also cut off and communications have not been restored.

He noted that areas hit by the tsunami in Donggala had a population in the thousands. Tsunami early warnings were issued, including to those regions, Dr Sutopo said.

However, he reiterated that there has been no update from those regions as communication lines to Donggala had not been re-established

“Up to this morning (Saturday), we have not yet established contacts with the Central Sulawesi governor, Palu mayor, Donggala regent,” Dr Sutopo said.

The land route from Poso to Palu, about a five-hour drive under normal conditions, was also cut off due to landslides, said Dr Sutopo.

He said that only two out of a total seven main electricity distribution boxes in Palu are working now.

Dr Sutopo said that aid and supplies were currently being brought  using helicopters to Palu airport from Jakarta and Balikpapan, in east Kalimantan province.

The Communications and Information Ministry dispatched teams on Saturday morning with 30 satellite phones and equipment needed to set up a satellite Internet system to help revive flows of information from the regions affected by the quake and tsunami.

As of 5am, more than 500 mobile phone towers in quake-affected areas were not functioning because electricity had been cut off, the ministry said in a statement.

Mr Syamsul Huda, a Sulawesi-based business director with state utility Perusahaan Listrik Negara, said his teams from around Palu are bringing in portable electricity generators and have started to comb the affected regions in Palu to identify the spots that are safe for them to reconnect power.

“Some spots affected by the tsunami should not yet be reconnected with power supply as it would pose risks of electrocution. In some cases, we have to fix the damaged installation first before reconnecting,” Mr Syamsul told Metro TV. Indonesia sits on the Pacific’s “Ring of Fire”, making it vulnerable to earthquakes as well as volcanic eruptions.

In December 2004, a 9.1-magnitude earthquake off the coast of Sumatra triggered a tsunami across the Indian Ocean that claimed 226,000 lives in 13 countries, including over 120,000 in Indonesia.