MAE SAI, THAILAND (AFP, REUTERS) - Thai rescuers on Thursday (July 5) said they may be prodded into a complex extraction of 12 boys and their football coach from a flooded cave if forecast rains hammer the mountainside and jeopardise the rescue mission.

Thirteen sets of diving equipment have been prepared for the team, who have endured 12 nights underground in the Tham Luang cave complex in northern Thailand after an excursion gone wrong.

Water is being pumped out of the deluged cave round the clock, reducing the flooding by 1cm an hour.

But with rain forecast to begin on Friday, the Chiang Rai provincial governor helming the unprecedented rescue effort conceded that the mission was now “a race against the water”.

“Our biggest concern is the weather. We are calculating how much time we have if it rains, how many hours and days,” Narongsak Osottanakorn told reporters, without providing further details.

In a sign of increased urgency, Narongsak said medics and Thai Navy Seal divers are assessing whether the boys are fit and well enough to be taken out early – apparently softening his stance on Wednesday that “no risk” will be taken with the evacuation. 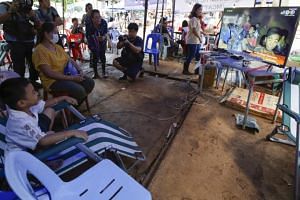 The prospect of the stranded team diving out is fraught with risk.  It takes seasoned cave diving experts around six hours to reach the muddy ledge where the boys are sheltering.

Many of the youngsters – who are aged between 11 and 16 – are unable to swim and none has diving experience. Thai Navy Seal experts are teaching them the basics of diving. But the areas where diving is still necessary are tight and may require the boys to swim through murky waters unaccompanied.

In a two-pronged strategy, cavers are also hunting for a chimney down to the boys, creating a potential second option for evacuation in the event heavy rain forces their hand.

The authorities still hope they can manage any fresh deluge, with high-powered pumps draining 128 million litres of water so far from the cave in a round-the-clock effort.

“We are draining as much as we can,” said Khao Khieupakdi, a Bangkok disaster prevention official, seconded to northern Thailand like scores of other specialists.

Water has been cleared from the entrance to a rescue base camp in “Chamber 3” inside the cave, but onward sections towards the boys remain impassable without diving, he said.

“I am concerned as the forecast is for more rain.”

Days in the dark

Concerns for the mental and physical health of the boys are mounting after a prolonged ordeal in the dark, claustrophobic cave complex.  Experts say the risk of psychological damage is high for youngsters trapped in traumatic conditions, while the lack of light may cause confusion.

British cave divers found the emaciated and dishevelled group on Monday, huddled on a muddy shelf with flood waters lapping ominously below, after nine days missing. Several Thai Navy divers and medics are staying with them and fresh video footage released on Wednesday showed the group in seemingly good spirits.

“They cannot do anything... they have to save energy,” said army Major-General Bancha Duriyaphan. “They are chit-chatting in general. Talking, eating and sleeping,” he said.

Kobchai Boonarana, deputy director-general of the Disaster Prevention and Mitigation Department, said it was up to the rescue team in the cave to decide whether and when the boys would be strong enough to tackle the journey out.

"Their conditions, we can see that their morale is good but what about their strength and their ability? That's up to the team inside to decide," Kobchai told reporters on Thursday.

"Our job is to keep pumping out water and it is up to the team inside to assess the safety level and whether the kids can travel safely through," he said.

There has been a hiccup in the pumping operations when "unregistered" volunteers negligently pumped water back to underground sources and obstructed rescuers' attempts to drain the flooded cave, said Narongsak on Thursday, according to Bangkok Post.

"They may have had some belief that their technique is effective for groundwater drainage, but anything that is not in the plan must be discussed with us first," said Narongsak.

Some relatives of the boys gathered near the cave early on Thursday, where a few rescuers were marching up to its entrance, a contrast to days of frantic activity during a search that has grabbed media attention around the world.

One mother said she had still not been able to contact her boy.

"Yesterday, they tried to take in mobile phones but the bag it was in broke," she said.

Rescuers had to contend with days of heavy rain that flooded the cave complex at the beginning of the search. But the weather has been relatively dry for the past four days.

Rescuers have sent in food, water and medical staff while they have been pumping water out of the tunnels, in a bid to lower water levels to help with the rescue.

But the meteorological department warned on Thursday that up to 60 per cent of the country's north, including Chiang Rai, can expect heavy rain from July 7 to July 12.