Evidence suggests the vessel sank, and preparations are being made to salvage it, says navy chief

Search-and-rescue efforts for a missing Indonesian submarine with 53 crew members on board have turned up debris believed to be from inside the submarine, Indonesian Armed Forces commander Hadi Tjahjanto told a media briefing yesterday.

"We have found an oil spill and debris as authentic evidence... that the submarine went down," Chief Marshall Hadi said.

"Among the evidence collected from the sea surface where the submarine was reported missing is sponge from a thermal insulation sheet, and a bottle of grease from inside the submarine," said Indonesian Navy chief Yudo Margono at the same media briefing. "The sponge was torn apart from its much larger size."

He said the grease is used as periscope lubricant.

Other items found included a prayer mat for the crew members, part of a torpedo tube straightener and a cooling pipe wrapper.

Preparations are being made to salvage the submarine from a depth of 850m, said Admiral Yudo.

"With the authentic evidence we found, believed to be from the submarine, we have now moved from the 'sub miss' (submarine missing) phase to 'sub sunk'," Adm Yudo said. "The submarine possibly began to crack... as it went down at a depth of between 400m and 500m."

He added that no bodies or survivors have been sighted so far.

Assets from foreign countries have been deployed in the search-and-rescue efforts, Chief Marshall Hadi said, stressing that Australia, the United States, Singapore and Malaysia have been doing their utmost to help.

The 44-year-old KRI Nanggala-402 submarine, among the world's oldest still in service, was due to carry out a torpedo drill after it requested permission to dive early last Wednesday, but contact was then lost.

A possible power blackout during the static dive may have caused it to lose control and become unable to perform emergency procedures, according to the Indonesian Navy. 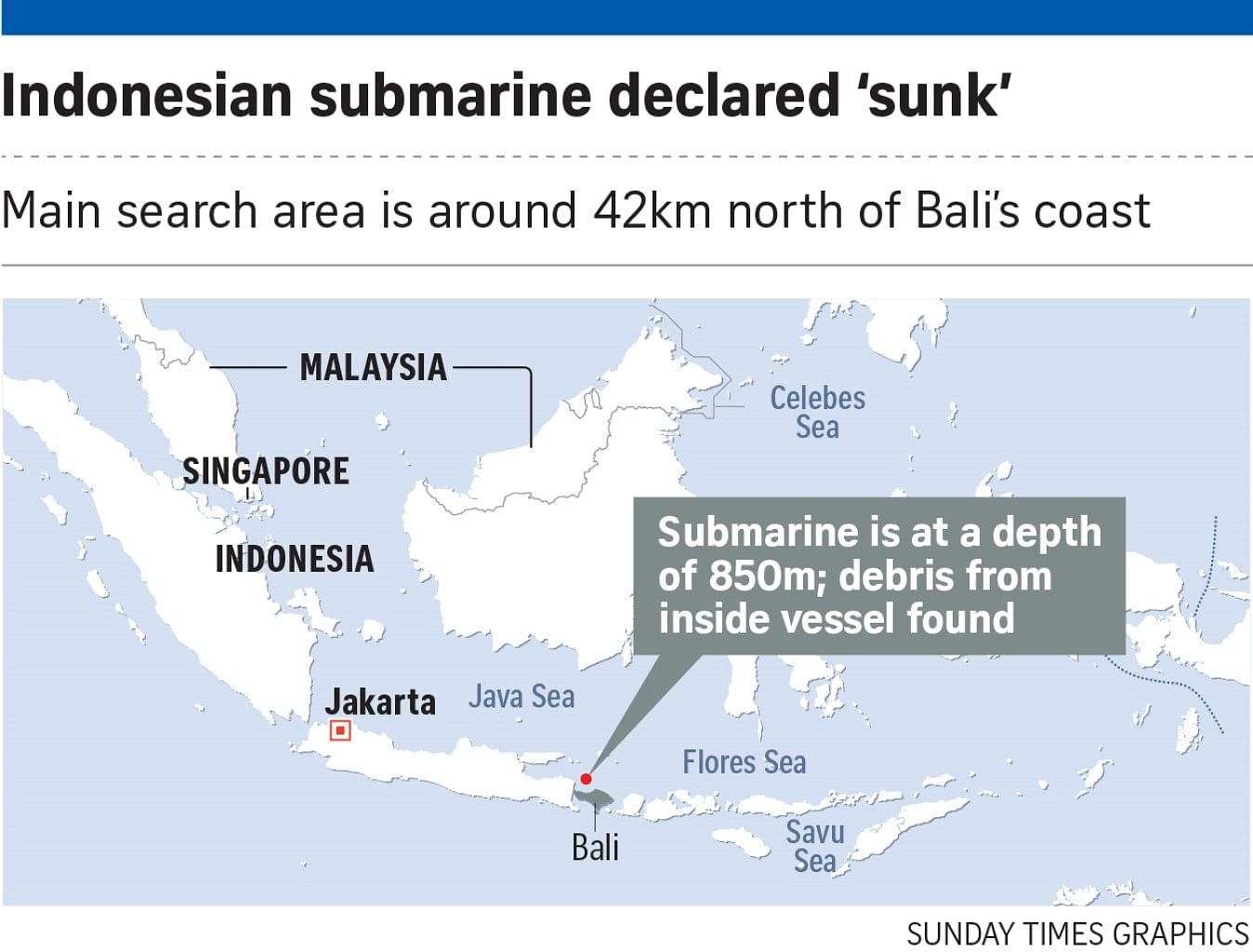 Navy spokesman Julius Widjojono has said that contact with the submarine had most likely been lost at 600m to 700m underwater; the vessel was designed to withstand depths of up to 500m.

Rescuers were racing against time in the last few days to find the submarine as its oxygen supply would last 72 hours from the time it went missing early on Wednesday, meaning that the air supply would run out at around 3am local time (4am Singapore time) yesterday.

"The 72-hour window has passed for the availability of oxygen," Chief Marshall Hadi said at yesterday's news conference.

The search operation was narrowed to areas near to the position where the submarine was last detected, 42km north of Bali. Adm Yudo had said earlier that a floating item with a "high magnetic force" had been found at a depth of 50m to 100m.

An aerial search also detected an oil spill close to the location where the submarine dived.

EVIDENCE THAT IT SANK

We have found an oil spill and debris as authentic evidence... that the submarine went down... The 72-hour window has passed for the availability of oxygen.

Singapore Prime Minister Lee Hsien Loong, speaking at the Asean leaders' meeting in Jakarta yesterday, expressed Singapore's thoughts and concern for the crew of the submarine and their families, as well as the government, people and armed forces of Indonesia.

Five military personnel from Singapore arrived in Indonesia on Friday to join the search and rescue operation.