PEMATANG SIANTAR (REUTERS) - At least 128 passengers were missing after a ferry sank in Lake Toba on Monday, a search and rescue official said on Tuesday (June 19) as rescue workers fought heavy rains and two-metre high waves in a search for survivors.

“Many people have reported their relatives missing,” Budiawan, head of the search and rescue agency based in the nearby city of Medan, told Reuters after a coordination meeting.

Authorities had previously said at least 80 people were thought to be on board the ferry that sank in rough weather.

An estimated 18 people had been rescued and one passenger was confirmed dead after the mishap. Some 100 rescue personnel, including military and police officials, were deployed in the search.

It was not immediately clear if foreigners were among the missing passengers.

"Our joint teams moved out at 7 am," Budiawan said earlier on Tuesday, adding that the teams would work for as long as the weather allowed.

"It might take time to find victims who drowned," he said, adding that some bodies may be trapped inside the sunken vessel.

Lake Toba, a popular tourist destination in North Sumatra, fills the caldera of a giant dormant volcano and is one of the deepest lakes in the world. 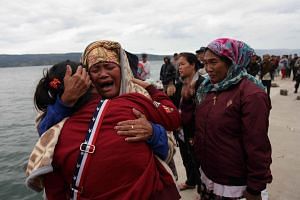 The wooden ferry had a capacity of 60 passengers but may have been carrying 80 people and dozens of motorcycles, said Sri Hardianto, an official at Indonesia's transport ministry.

The National Disaster Mitigation Agency had said there were unconfirmed reports of up to 130 people on board the ferry, which was hit by high waves and strong winds.

Video footage provided by the agency showed people on another ferry throwing life preservers and life jackets to several people in the water on Monday evening.

On Tuesday, distressed relatives of missing passengers held each other and cried as they waited for news at Tigaras Port, according to pictures from the scene.

Ferry accidents are common in Indonesia, a vast archipelago, especially during the Islamic holiday of Eid when millions of people make the annual journey by land, sea and air to their hometowns after the holy fasting month of Ramadan.