In its editorial, the paper reminds all of the importance of letting journalists do their job.

NEW DELHI (THE STATESMAN/ASIA NEWS NETWORK) - The discharge on bail of three journalists of Myanmar's Eleven Media group, two weeks after they had been charged under provisions of the country's penal code that allow no bail, suggests that the country is belatedly realising there are lines it cannot cross if it wishes to prolong the fiction that it is a democracy.

The arrests of executive editors Kyaw Zaw Lin and Nayi Min and chief reporter Phyo Wai Win followed publication of a report that raised questions on the funding of the Yangon's bus network.

To report on and discuss the business dealings of a provisional government, and to make elected representatives accountable, is an essential task of a responsible Press.

The Yangon government is run by a staunch ally of Aung San Suu Kyi.

The drastic step taken two weeks ago to arrest the trio on charges of publishing information that causes "fear or alarm in the public" and to throw them into the notorious Insein prison could not have been taken without a nod from the woman once hailed as a beacon of democracy.

Coming as the step did six weeks after Myanmar had sentenced two Reuters reporters to seven years in prison for investigating the slaying of 10 Muslims last year, it caused alarm across Asia and beyond.

The arrests were roundly condemned by Asia News Network, a grouping of Asian newspapers, of which this newspaper is a member. 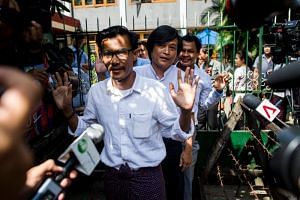 So strong was the reaction from around the world, including from the respected Reporters Without Borders and the International Commission of Jurists, that even Myanmar's Press Council was forced to say the arrests were harsh and that the matter ought to have been referred to it for adjudication.

ICJ in fact went so far as to say, "In reality it is attacks on the media that cause public fear and alarm as they undermine hard-fought democratic gains in Myanmar."

Finally, President Win Myint was forced to intervene; he urged the prosecutor to withdraw the charges and resolve the matter through the Press Council.

Even so, the journalists' travails haven't ended.

When the matter came up for hearing on Friday, the prosecutor failed to show up citing ill-health and the matter was adjourned to 9 November.

But for now, they are out of jail.

Myanmar under Suu Kyi has acquired the reputation of being a state utterly unwilling to accept critical comment.

Its record on preserving human rights, and press freedoms, is abysmal.

While in this case, Eleven Media's journalists have been freed on bail and returned to the sanctuary of their homes, the chilling effects of their unfair incarceration will linger.

It is important therefore for journalists in the country to remain vigilant, and for those in Asia and elsewhere with a commitment to democratic values to ensure the country remains under the scanner.

The Statesman is a member of The Straits Times media partner Asia News Network, an alliance of 23 news media organisations.