SINGAPORE - Asia Pulp and Paper (APP), one of the Indonesian companies blamed for the 2015 record-breaking haze in the region, has rubbished an Associated Press report implying it had covered up links to suppliers that practise deforestation or illegal slash-and-burn methods in a bid to void its sustainability claims.

In a statement on Friday (Dec 22), APP did not deny ownership or having links with most of the 27 suppliers that the Associated Press report said it had - except one with a firm named Muara Sungai Landak.

For instance, the firm cited how "all our relationships with our suppliers are guided by our Forest Conservation Policy and our zero-deforestation pledge".

It also added that there are safeguards to ensure compliance, and that contracts with rogue suppliers can be terminated.

"The articles also insinuate that our efforts are less than sincere. These allegations are false and malicious, and we strongly refute them," said the APP, Indonesia's largest pulp and paper firm, in response to an article published online by the Associated Press on Tuesday.

The article alleged that APP and its parent company Sinar Mas had control over nearly all 27 suppliers that APP had earlier claimed were independent, citing more than 1,000 pages of APP corporate records.

APP had likely done so to distance itself from rogue suppliers, allowing it to minimise responsibility, the report added.

For example, in November 2015, two of APP's suppliers - Bumi Mekar Hijau and Sebangun Bumi Andalas Wood Industries - had their business licences suspended by the Indonesian government over accusations of illegal forest fires.

But APP told the media then that both companies were independently owned, and that it had suspended contracts with the firms. A check on APP's website on Friday showed that APP still sources pulpwood from both firms in South Sumatra.

The Associated Press report also said APP is linked to Muara Sungai Landak, a firm which has been cutting down natural forests on Borneo, which shows that APP is indirectly flouting its no-deforestation pledge.

In Friday's statement, however, APP claimed that Muara Sungai Landak was not its supplier and has no business relations with the pulp giant, even though the Associated Press had found that the plantation firm is owned by two employees at Sinar Mas Forestry.

But on Friday, The Straits Times found on APP's website a map showing hot spots from the period between Dec 6 and 13, 2016, which clearly lists Muara Sungai Landak as one of APP's partner concessions in West Kalimantan.

Ms Zhang Wen, executive director of Singapore-based volunteer group People's Movement to Stop Haze (PM.Haze), told The Straits Times that if APP was found to have secret ties with suppliers who violate Indonesian law or their own sustainability standards, it weakened the firm's overall commitment. 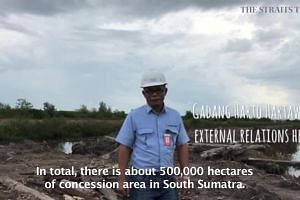 "We think, as the largest pulp and paper company in the world, APP has the responsibility and the ability to improve transparency and ensure (its) suppliers comply (with) high standards."

On Thursday, the Associated Press published another report alleging that one of APP's potential suppliers, Bangun Rimba Sejahtera, which it has ownership links to, plans to convert community land to plantations in Indonesia's Bangka Belitung island chain, despite resistance from villagers.

If APP does end up sourcing wood from this company, it would renege on its promise of obtaining free, prior and informed consent, said the Associated Press report.

Responding on this point, APP said on Friday it is still engaging with the supplier and would not approve sourcing from it without the consent of local communities.

Meanwhile, another Indonesian pulp and paper company with a presence in Singapore is also facing heat over its operations.

Riau Andalan Pulp and Paper, the operational unit of Singapore-based pulpwood company Asia Pacific Resources International, now has to adjust its 10-year work plan to meet the Indonesian government's directives, after it failed in a legal bid to avoid doing so.