JAKARTA (Bloomberg) - Indonesian officials do not expect a repeat of the forest fires that cloaked South-east Asia in a thick haze last year, though that may be due more to favourable weather than progress in addressing the underlying causes of the blazes.

Satellite imagery showed 730 hot spots in the year to May, down from more than 2,900 in the first six months of last year, government data show. Last year's fires raged out of control for months and unleashed smoke that closed airports and schools, for a time making Indonesia the world's worst greenhouse gas polluter.

"We have integrated fire patrol teams deployed in the villages where forest fires are an annual occurrence," said Mr Raffles Brotestes Panjaitan, the Environment and Forestry Ministry official tasked with overseeing fire prevention. "Normally forest fires are quite rampant in February and March but there are no fires in villages where patrols are deployed." 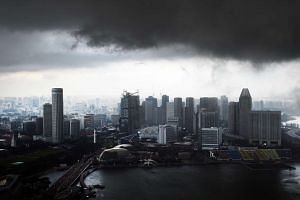 Expect more showers in second half of June: NEA

The smog has become an annual nuisance as the local practice of slash-and-burn farming is exacerbated by agribusiness companies that drain former swamp land to make way for palm oil, pulpwood and other plantations. Last year's fires peaked in September and October, sending haze across Singapore, Malaysia and parts of Thailand as governments argued over who was to blame.

The pending haze "season" is a reminder of the lack of progress Indonesia has made in tackling root causes of the haze, including a murky system of land ownership and permits and graft at a local level. That is even as President Joko Widodo, known as Jokowi, has vowed to punish those responsible for setting the fires that the World Bank estimates caused at least US$16 billion (S$21.7 billion) in economic losses for Indonesia alone.

The government has set up village patrols, increased fire prevention requirements for plantation companies and is reviewing permits issued to those who operate in areas prone to fires, Mr Panjaitan said. Still, it has not done enough to address the issue, said Mr Eduardo Mariz, an analyst with Concord Consulting in Jakarta.

Politics has played a "significant" part in that, he said. The country's palm oil industry accounted for US$18.6 billion in exports in 2015, or about 2.1 per cent of gross domestic product.

"It is clearly in the interest of most people in South-east Asia, including Indonesians, that plantation companies are discouraged from illegally starting fires," Mr Mariz said. "But there appears to be a limit to what Jakarta is willing to do."

Mr Joko's options are limited by a decentralised system of government put in place in 2001 that has focused power around local officials and made it harder to tackle corruption.

There is also been little effort made to address a complex system of overlapping land permits where forest is illegally burnt to claim ownership.

Last year, Mr Joko extended a moratorium on new palm plantations in fire prone areas and in April called for a ban on the expansion of existing plantations, saying the focus should be on increasing yields on current plots. There has yet to be progress on the ban. A spokesman for the President did not respond to a text message seeking comment.

Indonesia may get some help from the weather. Just as dry conditions from El Nino helped fuel last year's blazes, the transition to a La Nina weather pattern and its heavy rains should help keep fires under control, said Mr Andi Eka Sakya, head of Indonesia's Agency for Meteorology, Climatology and Geophysics. A "wet dry season" is expected from July to September, he said.

Singapore, which aside from Indonesia has borne the brunt of annual haze, has been vocal in pushing Indonesia to take action against companies found burning forests. Its Minister for the Environment and Water Resources Masagos Zulkifli said he is "cautiously hopeful" that Indonesia's efforts may curtail the haze this year.

"Either they have done something well, and it really has stopped, or the weather prevents it from happening," Mr Masagos said in a recent interview. "It looks like the latter will be likely."

One of the reasons Indonesia's fires are so difficult to control lies just beneath the surface. Much of Sumatra has a thick canopy of trees that covers waterlogged peat soil. When this swamp land is drained for logging or plantations, the peat dries out and becomes the perfect fuel for smoldering fires.

While that move was praised, Mr Teguh Surya, a forest campaigner with Greenpeace Indonesia, said the government must also ban plantation businesses from peatlands.

"These peatland areas never burnt before they were turned into tinderboxes through drainage for industrial oil palm and pulpwood plantations," Mr Teguh said. "Steps such as village fire patrols will never solve the problem as long as drainage continues."

Mr Audit Panjaitan of the Environment Ministry pointed to new requirements for plantation companies to set up their own fire brigades, and to invest in technology such as drones, thermal cameras and CCTV.

"There will be an audit on their compliance and we will give warnings if they don't comply," he said.

Indonesia Palm Oil Association secretary-general Togar Sitanggang questioned the requirement for fire-fighting equipment, saying it could cost each plantation up to 5 billion rupiah (S$505,000), even for small ones. Companies already have adequate equipment for fighting fires, he said, and blazes are normally started by local communities rather than corporations.

"We want to ask the government what do they want?" he said. "Do they want to burden the company?"