KOTA KINABALU (THE STAR/ASIA NEWS NETWORK) - A team of vets and wildlife officials conducting a post-mortem on an elephant in Sabah made a gruesome discovery on what caused the animal's death.

A detailed examination found that the pachyderm's carcass in Sungai Udin, Tawau district, was riddled with more than 70 bullets, believed to be fired from close range before its tusks were removed.

Information from the Sabah Wildlife Department was that at least four or five poachers were involved in the killing of the adult male pygmy elephant, which was initially thought to be a juvenile female based on earlier photos.

A source said the confusion could be due to the location where the carcass was found, which was half-submerged in a river.

"It is not sure whether the elephant suffered greatly before dying, but one bullet went right through the left temple."

The shot fractured and penetrated the skull and decimated the brain, meaning death would have been instantaneous after this shot was fired.

However, since there were more than 70 gunshot wounds all over, it was hard to determine which shot hit the elephant first. 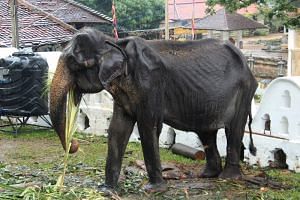 When contacted, Sabah Wildlife Department director Augustine Tuuga confirmed that the post-mortem had been completed and the nature of the elephant's death was cruel.

However, he did not elaborate on the findings.

Dr Sen Nathan, who was part of the team, thanked Sabah Softwood Bhd for its assistance.

Sabah Softwood provided the heavy machinery needed to bring the carcass from the river to dry land, and also prepared a boat during the search for the elephant earlier.

The pygmy elephant is totally protected under the Wildlife Conservation Enactment 1997, and anyone found guilty of killing it could be jailed up to five years and fined up to RM250,000 (S$82,400).

Elephants are continuously being killed over the years, as they are considered a nuisance to farmers and plantation owners, whose plantations can sometimes be destroyed by them.