KUALA LUMPUR (REUTERS) - Malaysia is investigating a surge in the number of deaths of pygmy elephants, an endangered species found in the tropical rainforests of Borneo, wildlife authorities said on Thursday (Aug 30).

"This is the highest recorded so far," Augustine said, referring to annual fatalities. Over 100 elephants have died in the last eight years in Sabah.

Conservation group WWF estimates that only around 1,500 elephants are left.

Baby-faced with oversized ears and long tails that drag on the ground, pygmy elephants are found on Borneo island which is shared by Malaysia, Indonesia and Brunei.

Loss of habitat is the biggest threat for the pygmy elephants, with deforestation, logging and rapid expansion of palm oil plantations contributing to the decline in their population. The elephants also fall prey to poachers or traps set up to catch animals.

Authorities have been unable to determine the exact reasons for the higher number of deaths this year, but Augustine said they have noticed elephants spending more time outside of forests and in plantations. 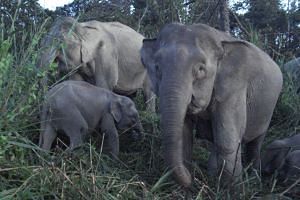 The rich rainforests of Borneo are surrounded by vast palm oil plantations.

Palm oil companies in Malaysia and Indonesia, the world's top two producers of the vegetable oil, have been accused of doing little to protect wildlife and their habitat.

The latest reported death in Sabah was on Saturday, when wildlife officers found the slightly decomposed carcass of a female elephant in a plantation, with what they believe was a gunshot wound at its temple.

There have been at least two other deaths by shooting and many others caused by injuries from traps.

Bringing the killers to justice has proven to be difficult, due to the remoteness of the locations and the sheer lack of information and witnesses, Augustine said.

Four male elephants died from snare injuries in the past two months and all of them were found in plantations bordering forest reserves, WWF said in a statement this week.