MANILA -  What was supposed to be a usual incident of a foreigner throwing a tantrum at a train station has turned into a controversy in the Philippines, stoking long-simmering resentment among many locals over China’s fast-growing footprint in the country.

On Saturday (Feb 9), a police officer stopped 23-year-old Chinese arts student Zhang Jiale as she was making her way through a turnstile at a Metro Rail Transit (MRT) station in Manila. She had in her hand a cup of soy pudding, known locally as “taho”.

The officer told her she could not take the cup to the station. She had to finish her pudding before he would let her in.

The government has banned certain liquid and gel items at MRT stations, because of reports that militants in the country’s volatile south are planning to bomb public transport systems in the capital.

Instead of complying with the order, Zhang, a first-year fashion student at SOFA Design Institute, argued with the police officer and hurled her cup of pudding at his chest.

The incident was captured on camera, and the clip quickly spread on social media, sparking nationalist outrage.

All across Facebook and Twitter, Zhang - who was arrested and charged - was derided for her “arrogance” and for being “disrespectful”.

Some said her behaviour was a manifestation of how many Chinese view the Philippines as a subservient vassal state, on account of the foreign policy pursued by President Rodrigo Duterte.

Vice-President Leni Robredo chimed in, saying Zhang’s actions were “disrespectful” and an “insult” to all Filipinos. “She not only disrespected a policeman; she disrespected the whole nation,” said Ms Robredo.

Senator Panfilo Lacson wrote on Twitter: “She’s undesirable. She’s also an alien. Declare her as both.”

Zhang faces charges of  “direct assault, disobedience… and unjust vexation”. If found guilty, she faces four months to four years in prison. As of Monday (Feb 11) afternoon, she was still in jail.

The immigration bureau, meanwhile, is considering deporting her.  But Foreign Secretary Teodoro Locsin is  advising caution. “Way to proceed: calmly,” he said in a Twitter post.

He warned that this outrage  could provoke an equally emotional response in China, which could jeopardise Filipinos working not just in the mainland, but also in Hong Kong and Taiwan.

“I take the larger responsible view that includes our people in China, where a little outburst of reactive xenophobia could get them in deep trouble, not to mention be torn to pieces by the mob,” he said. 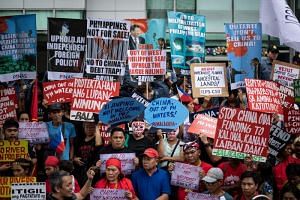 The Xi-Duterte 'rainbow connection': Less than meets the eye

Mr Duterte’s spokesman Salvador Panelo said in a text message: “Let’s not make a big fuss out of this. She has been charged, for one, and two, they are considering deportation.”

But he did advise foreigners in the Philippines to “always behave”.

That the incident stoked so much disdain comes as no surprise.

Mr Duterte’s economics-driven rapprochement with China is stirring resentment among many Filipinos, who believe this policy is encouraging hordes of Chinese to flock to the Philippines, creating disruptions.

Lawmakers are investigating reports that millions of Chinese migrants are working and living in the Philippines, taking even menial jobs away from Filipinos.

Last week, 30 undocumented Chinese vendors, cooks and hairstylists were arrested at a condominium complex in Manila, near where offshore gaming companies are operating.

That tipped the number of illegal Chinese workers  that the immigration bureau has nabbed in two years to over 2,000.

With so many of them coming and snapping up condo units, even at inflated prices, the Chinese are also being blamed for jacking up property rates in prime housing estates by as much as 65 per cent.

Then, there is the South China Sea.

Mr Duterte has essentially ignored disputes between Manila and Beijing over parts of this strategic waterway, as he courted Chinese investors  through an ambitious US$169 billion (S$$230 billion) infrastructure-building programme.

Nearly nine in 10 Filipinos think he is wrong, and should instead be confronting China for the missiles, artillery and warplanes it is installing on islands it has built across the South China Sea.

Some senators have moved to block a contract that will allow Chinese tech behemoth Huawei to supply equipment for a 20 billion-peso (S$520 million) CCTV surveillance system, citing national security risks.

Huawei is facing sweeping charges  by the United States, outlining a decade-long attempt by the company to steal trade secrets, obstruct a criminal investigation and evade economic sanctions on Iran.

Ms Robredo, the vice-president, said Zhang’s case  is, in a larger context, an offshoot of the “special treatment” Mr Duterte is giving China.

“This is a wake-up call for all of us. We take care of them, and yet we are being disrespected,” she said.

But Mr Locsin, the foreign secretary, thinks that is stretching the issue too far, saying Zhang was flinging taho, not encroaching on national territory.