YANGON (AFP) - Myanmar's army sparked public criticism on Saturday (March 12) after it nominated a retired general still blacklisted by the United States to be vice-president of the country's first civilian government in decades.

Hardliner Myint Swe, 64, is seen as a close ally of former junta leader Than Shwe and comes from a military establishment that pummelled the South-east Asian country into poverty under decades of isolationist rule.

A parliament dominated by Ms Aung Sang Suu Kyi's National League for Democracy is days away from confirming a president after sweeping to power in November elections, but the still-strong army has the right to nominate a candidate.

Though the NLD's nominee Htin Kyaw is all but guaranteed to clinch the top post, the army's Mr Myint Swe would still become one of two vice-presidents.

Social media sites and comment boards were flooded with criticism after his nomination was announced, with many expressing regret over the military's continuing political influence.

"Even though we hoped to see a civilian government, we have to accept a thief anyway," wrote Facebook user Aung Kyaw Oo. 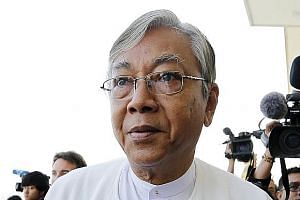 Suu Kyi's ally on track to be Myanmar's president

Zaw Linn posted, "I can't understand why the military chose someone who the people so strongly do not want."

The US State Department confirmed that Mr Myint Swe, now Yangon chief minister, still faces sanctions but did not say whether this would affect diplomatic relations.

"We have made our concerns known about this individual and this process, quite frankly, and we'll monitor it going forward," spokesperson John Kirby said in a Washington briefing on Friday (March 11).

The US began easing economic sanctions on Myanmar after a quasi-civilian government took over from the junta in 2011 and unleashed a wave of political reforms.

But dozens of business tycoons and senior military figures, including Mr Myint Swe, have been kept on the treasury department's list of "Specially Designated Nationals" and Americans are barred from doing business with them.

Questions also remain about the retired general's eligibility for the role, as he was disqualified from the vice-presidency in 2012 for having a son-in-law with Australian citizenship.

The country's army-scripted charter bans anyone with close foreign relatives from the top office, which is why Suu Kyi herself is unable to officially take the helm despite her widespread popularity.

The 70-year-old Nobel laureate - whose sons have British citizenship - has long said she would circumvent the ban by ruling "above" the president.

Her choice for a proxy, respected writer and long-time friend Htin Kyaw, is highly likely to assume the role after sailing through a parliamentary vote this week.

A military spokesman declined to comment on how the army's nominee would evade the foreign citizenship clause, which many suspect was written specifically to sideline Suu Kyi.

"We can only confirm to you that he is who the military chose as vice-president and we can't comment on the other issues," Colonel Khin Maung Cho told AFP.