MANILA (AFP) - Protesters descended on the Chinese embassy in Manila on Tuesday (April 9) to oppose the Asian superpower's growing sway in the Philippines and as tensions rise over Beijing's presence in the disputed South China Sea.

"The government headed by President (Rodrigo) Duterte is not responding. What China is doing is almost an invasion," marcher Alex Legaspi, a 53-year-old teacher, told AFP.

While Duterte has largely set aside the once-heated territorial standoff over the sea, tensions have flared since hundreds of Chinese vessels appeared recently near the Manila-held Pag-asa island, also known as Thitu.

The Philippines called the boats' presence "illegal" and Duterte threatened China with possible military action if it touches the island.

However, the president has repeatedly said war with China would be futile and he has no intention of getting into a conflict with the rising power he has courted for trade and investment.

Duterte has been criticised at home as being too eager to grow ties with Beijing, and giving up too much leverage on the South China Sea issue.

Meanwhile, the United States has moved to boost its relationship with long-time ally and former colony the Philippines. 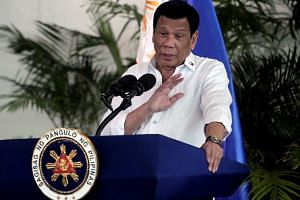 A small group of policemen monitored the protesters, who numbered around 1,000 according to journalists on the scene. The marchers dispersed peacefully after the demonstration.

Protesters also voiced simmering unease over the terms of Chinese loans for infrastructure in the Philippines, including a massive dam-building project.

China is poised to loan some US$210 million (S$284.2 million) toward the construction of the Kaliwa Dam, a project that has been delayed for years and would fill gaps in the Philippines' chronic need for infrastructure.

"The loan agreement signed by (Chinese President) Xi Jinping and President Duterte will send us into debt trap," she added.