KUALA TERENGGANU (THE STAR/ASIA NEWS NETWORK) - Less than a month after two women were caned for attempting to have sexual relations, another woman could face the same fate after pleading guilty to a prostitution charge.

The 30-year-old divorcee pleaded guilty at the Syariah High Court in Terengganu for preparing to offer sexual services at a hotel.

According to the statement of facts, the woman was wearing a sleeveless night gown when she was with a man inside a hotel room during a raid by the Terengganu Religious Affairs Department around 11.45pm on Sept 17.

It is believed the woman was offering sexual services for between RM300 (S$99) and RM3,000, but received only RM100 from her client that night.

The enforcement team seized several items during the raid, including underwear, condoms, lubricant and a mobile phone.

The woman was charged under Section 25 of the Syariah Criminal Offences (Takzir) Enactment 2001, under which she could be sentenced to a prison term of not more than three years, or fined not more than RM5,000, or caned no more than six times, or any combination of the punishment.

Judge Rosdi Harun offered a chance for the woman, who is a single mother to a seven-year-old daughter, to plead for a lighter sentence, as she said she could not afford the fine. 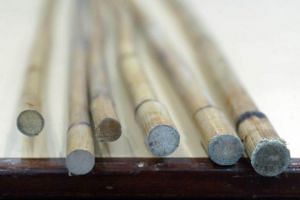 The woman told Judge Rosdi that she had not received any financial support from her former husband since they divorced seven years ago.

The court set Thursday (Sept 27) to decide on the punishment.

The woman was released on bail of RM3,000 in two sureties while she awaits her sentence.

On Sept 3, two women were caned six times each at the Syariah High Court for attempting to have sexual relations inside a car in Dungun in August.