MANILA (REUTERS) - Philippine police on Tuesday (Sept 25) arrested a lawmaker who is among President Rodrigo Duterte's most vocal critics, just minutes after a court issued a warrant on revived charges of rebellion that were dropped in 2011 after an amnesty.

The arrest of Senator Antonio Trillanes is the latest round in his sparring with Mr Duterte, whom he accuses of hiding wealth and being responsible for alleged executions of thousands of suspected criminals and drug dealers, which Mr Duterte denies.

Mr Trillanes has backed several complaints to the International Criminal Court (ICC) seeking the President's indictment for crimes against humanity and has protected people willing to testify against Mr Duterte.

"This is a debacle and a defeat of democracy," Mr Trillanes, a former navy officer, who accompanied arresting officers into a vehicle and was taken to a police station to be photographed and fingerprinted before posting bail, told reporters.

"We expect other forms of harassment in the days to come,"he said, adding that he expected the worst.

"The court has spoken," he said in a statement. "Let us stop the drama by press conference and allow the legal process to take its course." 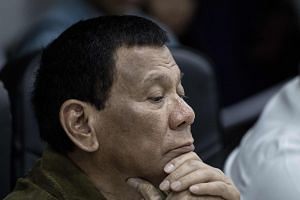 Mr Trillanes, a household name in the Philippines for his efforts to bring down the President, has stolen the political limelight in the three weeks since Mr Duterte voided an amnesty given to him by predecessor Benigno Aquino, citing flaws in the procedure, including a missing application form.

He had been holed up in his office under the Senate's protection since Mr Duterte's order for the police and army to arrest him, although they were reluctant to do so.

Mr Duterte later agreed a court warrant was necessary, following an outcry from opponents and legal experts who called it authoritarian and unconstitutional.

Mr Trillanes received clemency after involvement in a failed 2003 coup and a mutiny four years later, both aimed at overthrowing then-President Gloria Macapagal Arroyo, an ally of Mr Duterte who is now lower house speaker.

Two lower courts had dismissed rebellion charges against him based on the amnesty.

On Tuesday, a poll showed Mr Duterte suffered the biggest ratings slump of his presidency in the third quarter, amid signs of public unease about rising inflation and the cost of staple foodgrain rice.

Mr Duterte's critics have accused him of trying to distract the public and prioritising a settling of scores rather than tackling problems like inflation, which his office rejects.