Mr Joko, known as Jokowi, ordered ministers, officials and central bankers on Thursday (July 26) to step up efforts to lure more foreign visitors into the pristine sand beaches dotting hundreds of islands across the archipelago. He also asked provincial chiefs to expedite tourism and exports-related investments to address the twin deficits of current-account and trade.

The current-account shortfall is set to swell to the highest in four years as foreign investors turn net sellers of Indonesian bonds and stocks amid a selloff in emerging markets triggered by rising US interest rates and a stronger dollar.

Foreign investors have pulled out a net US$3.8 billion (S$5.2 billion) from bonds and stocks this year as the rupiah weakened more than 6 per cent against the dollar, according to data compiled by Bloomberg.

"There are still two problems that we need to solve - the current-account deficit and trade deficit," Mr Joko told the meeting of provincial chiefs in Jakarta.

"If we are able to see a surplus in current account, then we can relax."

The current-account deficit is seen widening to about US$25 billion this year, or about 3 per cent of the gross domestic product, according to Bank Indonesia Governor Perry Warjiyo. That would be the highest shortfall since 2014, according to central bank data.

South-east Asia's largest economy posted a trade deficit of US$1.02 billion in the first half after recording surplus for three years in a row, official data show.

Bank Indonesia will collaborate with the government in expediting the licence process for tourism-related investments, increase the availability of cheap flights, airport access as well as promote religious tourism, Mr Warjiyo said. 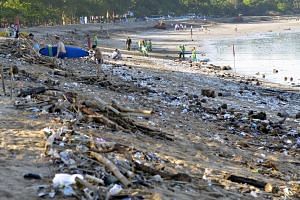 Indonesia is aiming to draw 20 million foreign tourists next year with a potential to generate US$20 billion in revenue from by promoting 10 new Balis, a strategy that includes developing infrastructure in Sumatra in the country's west to North Maluku in the east.

The industry can accelerate economic growth, create jobs, boost small- and medium-enterprises and reduce poverty, according to Bank Indonesia. The central bank will introduce a number of initiatives to promote tourism next month, according to Mr Warjiyo.

Indonesia plans to extend tax-breaks to new investment for up to 50 years to woo more investors and improve the manufacturing sector, Finance Minister Sri Mulyani Indrawati told reporters on Thursday. The government also asked exporters to repatriate foreign exchange to strengthen the nation's current-account, the minister said after a meeting between Mr Joko and exporters.