Since the presidential tickets were officially announced in August 2018, most polls have put Mr Joko, better known by his nickname Jokowi, at an electability rate of around 53 to 60 per cent, while Mr Prabowo, a retired army general and chairman of the Gerindra party, has languished in the mid-30s.

Mr Joko won the 2014 election by 6.2 percentage points, but his lead over Mr Prabowo has seemingly increased significantly since then. December surveys conducted by Jakarta-based pollsters Indikator Politik Indonesia and Charta Politika have Mr Joko's numbers up by 20.1 and 19.1 percentage points, respectively.

The most recent poll, released by Australian market research company Roy Morgan last Friday (March 1), found that Mr Joko and his vice-presidential candidate Ma'ruf Amin were leading at 58 per cent while the Prabowo-Sandiaga Uno pair was at 42 per cent.

"The strong performance of the Indonesian economy over the last five years and the exceptional confidence expressed by everyday Indonesians over the last year are certainly strong pointers to the success of President Jokowi's political leadership heading towards the April presidential election," Roy Morgan chief executive officer Michele Levine said in a press statement.

Several polls also indicate that the Jokowi-Ma'ruf ticket has made inroads in Mr Prabowo's strongholds such as Banten and West Java, which the former general won by 19.6 and 14.2 percentage points in 2014, respectively. 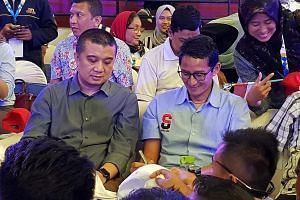 Jokowi tipped to win in East Java despite changing dynamics

Jokowi campaign chairman Erick Thohir said he was confident the President would win West Java and keep it close in Banten.

Charta Politika executive director Yunarto Wijaya said Mr Joko's choice of Mr Ma'ruf, a Muslim cleric, as a running mate had been effective in countering the perception that Mr Joko was "anti-Islam" in the two provinces, which are considered among the most religiously conservative in the country.

"Although Ma'ruf doesn't provide much of an electoral incentive, his presence does help in minimising the attacks against Jokowi," he told The Jakarta Post recently.

He added that Mr Joko's team as a whole had also been more aggressive in fighting back against "hoaxes" and attacks that cast aspersions on his Muslim credentials.

Jokowi campaign spokesman and Indonesia Solidarity Party (PSI) secretary-general Raja Juli Antoni said the campaign was happy about the survey results but that it would not be complacent in the lead-up to election day.

"We hope that (Mr Joko)'s supporters do not become overly confident and get caught off-guard," he told the Post on Monday. "In these last 40 days, it's time for everyone to band together and ensure that Jokowi-Ma'ruf wins at every polling station across Indonesia."

He added that the campaign was also looking at several swing provinces.

"Everyone must go into the field and make blusukan (impromptu visits) to convince people to elect a good person as the next president," he said.

The campaign team for Mr Prabowo and Mr Sandiaga, however, contested the accuracy of the survey results, saying that its own internal polls indicated the race was much closer.

"Our internal surveys show that Jokowi-Ma'ruf's electability is trending downward while Prabowo-Sandi is trending upward due largely to Pak Sandiaga's campaigning," Prabowo campaign spokesman and Prosperous Justice Party (PKS) executive Suhud Aliyudin told the Post. "The difference is not too large and the race will likely be decided by swing voters."

Gerindra politician and fellow Prabowo campaign spokesman Andre Rosiade echoed Mr Suhud's comments, suggesting that the Jokowi team should just stop campaigning if they were confident the gap was so large.

"We can only laugh (at the poll results)," he said. "We have our own numbers and we are not worried. We will ramp up our door-to-door campaigning in these last few days and, God willing, Prabowo-Sandiaga will win on April 17," Mr Andre said.