JAKARTA (REUTERS) - Indonesian President Joko Widodo unveiled his Cabinet for a second term on Wednesday (Oct 23), retaining former World Bank executive Sri Mulyani Indrawati as finance minister and including the leader of the opposition in the team as he seeks to push through reforms.

Mr Joko has pledged to quickly remove scores of regulations that are hampering investment and help to create jobs.

However, he faces fresh challenges after some of the biggest student demonstrations in decades erupted last month opposing new Bills Parliament had tried to push through that critics say undermine democracy and threaten basic freedoms.

Here are some key policy issues facing the President:

Hampered by soft commodity prices, Indonesia has struggled to lift economic growth above 5 per cent in recent years despite a boom in infrastructure building and attempts to cut red tape hampering investment.

Indonesia has attracted investment in mineral smelting, but has failed to win as much of the manufacturing investment moving out of China compared with some rivals.

But the stakes are high given 2019 economic growth is expected to slow for the first time in four years amid risks of global recession.

Student protests may persist amid anger over a law that they say weakens the war on graft and other controversial new Bills, including a criminal code that outlaws sex outside marriage. 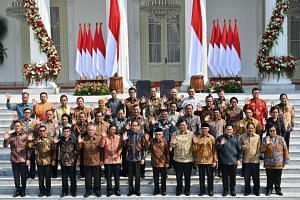 Ahead of his inauguration, Mr Joko approved Parliament's Bill to put the Corruption Eradication Commission under the watch of a new committee and curb its freedom to wiretap suspects.

In a country where about half the population is under 30, students consistently rank near the bottom of international student surveys.

The President has allocated money for skills training for the unemployed and expanded a programme to pay for higher education for the poor.

Government officials also say a ban on foreign ownership in the university sector will be lifted, but primary education, particularly in remote areas, remains under-resourced.

Indonesia's two eastern-most provinces are among the country's poorest regions and have seen a spike in violence since August, triggered by racial slurs made against Papuan students on the main island of Java.

Demands by some separatist groups for a new independence referendum have gained momentum during the unrest.

Some Papuans see a 1969 vote to integrate the former Dutch colony with Indonesia, which was backed by the United Nations, as illegitimate.

Mr Joko has said he is open to holding talks with separatist leaders to end the unrest, a departure from the stance of previous governments and some of his ministers.

Indonesia has the world's biggest Muslim population and is often seen as an example of how democracy and Islam can co-exist, but rising conservatism has fanned greater intolerance in a country with significant religious and ethnic minorities.

At the same time, Indonesia is grappling with a resurgence in Islamist militancy after a series of suicide bombings in the city of Surabaya last year and the recent stabbing of the country's then chief security minister by a suspected militant.

Indonesia recently suffered its worst forest fires since 2015 and as the world's biggest palm oil producer has been fighting a plan by the European Union to phase out using the oil as a transport fuel due to links to deforestation.

Mr Joko announced plans in August to move the capital from the crowded, flood-prone city of Jakarta on Java island to the forested island of Borneo, triggering questions over how the plan would be financed and its environmental impact.