SYDNEY (AFP) - A former policeman who fled Malaysia after being sentenced to hang for the killing of a Mongolian model, in a scandal linked to his country's ousted government, should face a new trial, political leader Anwar Ibrahim reportedly said on Thursday (May 17).

Sirul Azhar Umar, who is now in Australian custody, has claimed he was ordered by "important people" to murder Altantuya Shaariibuu in 2006.

Altantuya was the lover of Abdul Razak Baginda - a former close associate of now deposed Malaysian premier Najib Razak - who was accused of arranging kickbacks for the purchase of French submarines in 2002.

Opponents of Mr Najib's government have long alleged that Sirul and accomplice Azilah Hadri, members of an elite unit that guards top Malaysian ministers, were scapegoats in the killing to hide the involvement of their masters at the highest levels of government.

Sirul has previously threatened to reveal who gave the order.

Reformist politician Anwar, who was released from prison on Wednesday after his sodomy conviction was quashed by the king following Mr Najib being toppled, suggested Sirul should be brought back to Malaysia for a fresh trial.

He told The Australian newspaper the original trial and the judges' ruling was "compromised" and the reluctance of the judges to call relevant witnesses "made a mockery of the law".

"The best way is to proffer a new charge and allow for a full hearing of the case," he said. 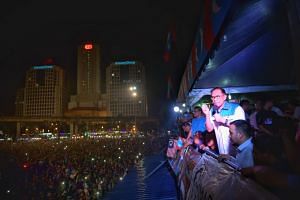 Anwar Ibrahim makes first public speech in 3 years, says King asked his wife if she wanted to be PM 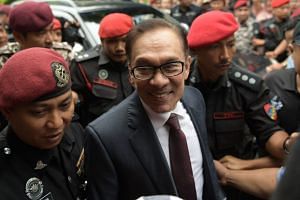 Anwar is the presumptive successor to new Prime Minister Mahathir Mohamad following a stunning election upset last week, with his one-time nemesis turned ally vowing to step down in a year or two to make way for him.

Sirul was reportedly detained in Australia in 2015 and has been held in custody since, although Canberra has never officially confirmed this.

A report in the Guardian last week said his bid for a protection visa would be heard within months. Authorities refused to confirm this to AFP or comment on other details of the case.

According to the newspaper, Canberra has allowed Malaysian officials and their middlemen to meet with him regularly, including one from Mr Najib's United Malays National Organisation party's youth wing a fortnight ago.

It cited a source as saying the Malaysian visitor delivered a message to his countryman: "Don't say anything."

The scandal is one of Malaysia's most sensitive topics, with suspicions swirling for years that Altantuya was murdered to keep her quiet about shenanigans in the submarine deal.

Mr Najib has repeatedly denied any wrongdoing over the deal amid allegations that French submarine maker DCNS paid "commissions" of more than 114 million euros (S$180.67 million) for two Scorpene submarines, which Malaysian critics allege were kickbacks.

Altantuya, 28, was shot dead and her body blown up with military-grade plastic explosives outside Kuala Lumpur.

Sirul and Azilah were convicted in 2009 and sentenced to hang. They were later released when an appeals court overturned the conviction in 2013 after raising questions about how their trial was conducted.

But Malaysia's highest court upheld their death sentences in 2015. Sirul fled the country ahead of that ruling.