KUALA LUMPUR (THE STAR/ASIA NEWS NETWORK) - Calm has returned to Kuala Lumpur's Low Yat Plaza - the scene of a mob attack at the mall on Sunday - as police said they had arrested 18 rioters and assured traders and the public the area was under control.

City police chief Senior Deputy Comm Datuk Tajuddin Md Isa said  a total of 18 people have been arrested over two days in connection with the theft and subsequent riots near Low Yat Plaza. Those arrested were aged between 16 and 40, including the man who was suspected of stealing a mobile phone at the shopping complex on Saturday.

Five people, including two photographers and one journalist, were injured during the brawl at the mall after midnight on Sunday.

"Those arrested were connected to four cases. There are cases of theft and riot on Saturday and two cases of rioting with weapons on Sunday night," he told a press conference on Monday.

He also refuted claims that the main suspect in the theft case was actually a victim of fraud, whereby he was sold a clone phone. 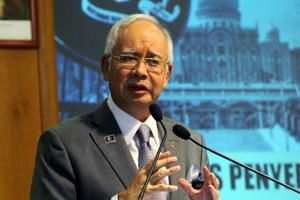 He confirmed that the main investigation was focused on theft of a mobile phone and that the incident was not racially motivated.

"There are too many rumours and false news in social media. This is one of the reason violence escalated last night and early this morning," he said.

"I hope all social media users can think rationally and not be influenced by unverified news and information," he said.

Tajuddin said the public and tourists should not be concerned as the Golden Triangle area, where the mall in Bukit Bintang is located, was safe. He also assured the public that police presence would be beefed up to maintain order.

"We have things under controlled. People are safe to go to the area," he said.

Although the situation at the mall has mostly returned to normal, some retailers on Monday kept their shops shuttered despite the mall management's request to open for business as usual.

The shopping mall in Bukit Bintang area, famous for digital gadgets, opened as usual at 10am on Monday, with most restaurants, IT shops and mobile phone retailers seen arranging their products and opening counters.

However, some shops were closed due to what they said was a "security risk". When pressed for details, however, employees did not want to elaborate.

A salesgirl, who wanted to be known only as Sue and who witnessed the incident, said she was scared but her employer told her to "relax and just do her job".

"We were asked to open our kiosk even though the risk is higher at the ground floor. After seeing that incident, obviously I'm scared, but my boss came down and told us to stay strong and just entertain the customers," said Sue, who has worked in Low Yat for nine months.

A Myanmar national, who only identified himself as Alli, said he was not scared but at noon on Monday, his employer told him to close the shop.

"I am not scared because I did not do anything wrong and I am only here to work. Whatever happened yesterday should be left behind. We have to get on with our work," he said.

Restaurant owner Mohd Hijrah Raj said businesses were affected during the past two days but hoped things had returned to normal.

"For me, it was a small problem. It all started because of a handphone.

"It was tense yesterday. We were all worried. It looks good now. Happy that I am able to open my restaurant," said Mohd Hijrah.

Bukit Bintang MP Fong Kui Lun said the incident was uncalled for and urged the police to investigate the matter thoroughly.

He said the Low Yat management had sent CCTV footage of the incident to the police.

"It should not happen again because businesses will be affected. I got to know about it through a friend, I was at a function.

"Police should take necessary action to make sure this place is peaceful because this is a tourist spot. My friend from China also spoke about it.

"It is under control right now and I've contacted the police for extra security. For me, this is not a racial issue," he said.

Mr Fong also said most businesses would be open and was hopeful for a return to normalcy.

The event was triggered by an incident on Saturday when a youth, who was nabbed for shoplifting, returned later with a group, and a brawl ensued between them and sales clerks at a smartphone retailer's counter on the ground floor of the mall.

Protesters gathered outside the mall on Sunday evening, and the police had the situation under control.

However, things escalated past midnight when the mob attack took place.

There has been speculation that the incident was the result of a racial dispute and that members of the Malay-Muslim group Pertubuhan Kebajikan dan Dakwah Islamiah Se-Malaysia (Pekida) was involved.

But Pekida on Monday denied it was involved in the brawl.

"For Pekida, even before we hold any gathering, there has to be instructions first. In this case, no instructions were given,” a representative of the organisation  told The Star.

He also said that the Low Yat Plaza incident should be left to the police to investigate.

"As of now, we have not received a report on the incident. We are currently trying to get in touch with the authorities to receive the full facts of what had happened. Whatever it is, the matter has been handed over to the authorities, so that they may conduct investigations."