The order came after police on Sunday said dozens had been arrested in connection with rioting in the region's capital.

"Everyone is forbidden from carrying out demonstrations and conveying opinions in public that could give rise to anarchist acts, damage, and burning of public facilities," as well as clashes between groups, the six-point order posted on the police Twitter feed said.

The impoverished region of Papua has been the scene of a low-level insurgency against Indonesia's rule for decades.

Indonesia earlier said it would deploy about 2,500 more police and troops to Papua, adding to about 1,200 personnel it had already sent after unrest sparked by anger over racism and calls for independence.

On Thursday, more than a thousand demonstrators hurled stones and set fire to shops and an assembly building in the provincial capital Jayapura.

That came a day after a deadly clash in another part of the island region, which shares a border with independent Papua New Guinea.

"I will not give permission for any more rallies and if anyone dares to try again they will face firm action," regional police chief Rudolf Rodja said in a separate post on the Twitter feed on Monday. 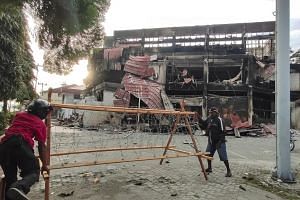 Among other provisions, the police order also forbids the spreading of "fake news" and the carrying of sharp weapons.

Police on Sunday said they had rounded up several dozen people who had taken part in the riots and charged 28 of them over looting and carrying weapons.

Two students were also arrested in Indonesia's capital Jakarta at the weekend for alleged crimes against state security, including owning clothing with the image of Papua's banned flag.

This week, violence flared in remote Deiyai, where a clash between protesters and Indonesian security forces left at least one soldier and two demonstrators dead, according to officials.

There have been unconfirmed reports that security forces gunned down six protesters.

The unrest across Papua appears to have been triggered by the mid-August arrest of dozens of Papuan students in Java, who were also racially abused.

Jakarta took control of the former Dutch colony in the 1960s after an independence referendum widely viewed as a sham.