JAKARTA (BLOOMBERG) - Indonesia's crackdown on waste imports is backfiring, with its plastic recycling industry in disarray and hundreds of containers of used materials clogging its ports.

The authorities ordered close scrutiny of trash imports after random inspections in May led to the discovery of more than 80 containers of illegal waste from the United States, Australia and Europe.

About 1,000 containers are now waiting for inspection at the country's ports; about 600 of them at the Batam port alone, according to Indonesia Industrial Plastic Export-Import Association.

Indonesia, Malaysia and the Philippines are among countries pushing back against imports of waste, following China's lead that imposed curbs on shipments last year.

Now, plastic trash, including those from the US, Germany and Australia could take weeks before being cleared by Indonesian customs, plastic association chairman Akhmad Ma'ruf Maulana said.

The delay in customs clearance at Indonesian ports have also led to a pile-up of about 1,600 containers of waste in Singapore, which are now being exported to Vietnam at a discount, Mr Maulana said.

While the government is sympathetic to the importers' concerns, inspection will still be mandatory, as plastic scrap imports are deemed "risky", customs spokesman Deni Surjantoro said.

There's a need to review the existing policy and find a balance between preserving the environment and protecting domestic industries, he said.

"In the past month, the plastic scrap importers across the country have been forced to pay huge amounts as demurrage cost and detention fees," Mr Maulana said in an interview. 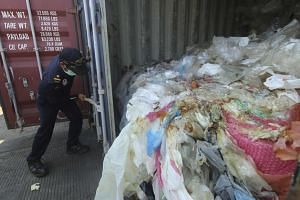 "Three companies have closed their operations as they failed to get the raw materials. If the situation persists for the next one week or two weeks, more companies will follow suit."

It appears the clampdown is intensifying. The trade ministry plans to tighten import rules for non-toxic waste by requiring Indonesia's trading partners to register their trash exporters and all local importers to be certified, according to Director-General of Foreign Trade Oke Nurwan.

The recycling industry, where 45 members have invested trillions of rupiah, is asking the government to allow imports of plastic scrap with 5 per cent impurities and make the buyers responsible in incinerating it, Mr Maulana said.

Plastic waste can be processed into items like garbage bags, and 70 per cent of these products were exported to China, he said.

The whole recycling industry is paying the price for the lapses of a few importers, Mr Maulana said.

"Let's say that you have a knife factory and suddenly people are using your knife to commit murders. Then, as a solution, you are forced to shut down your factory. Is that the right thing to do? Of course not," he said.