PHUKET (CHINA DAILY/ASIA NEWS NETWORK) - Mr Zheng Lancheng - the sole member of one family to survive a tour boat sinking in waters off Thailand last week - sits in a chair with a bag in his hand. Inside are clothes for his dead wife, daughter, son-in-law and 18-month-old granddaughter, whose bodies are in a morgue.

Along with his granddaughter's clothing is a table tennis ball, which was her favourite plaything when she was alive.

Last Thursday (July 5), five family members were on one of two boats carrying a total of 127 Chinese tourists. The boats capsized in a violent storm near the southern resort island of Phuket late that afternoon.

Of the Chinese tourists, 41 were confirmed dead. Others remained missing, although 78 were rescued, according to the Chinese embassy in Thailand.

"My son-in-law didn't like travelling, and I had been to Thailand in 2014, so we two were reluctant to go at first. But my daughter persuaded my son-in-law and I was persuaded by my wife, which led to this trip happening," Mr Zheng was quoted as saying by Meiri Renwu, a WeChat account operated by Boya Tianxia Media Group in Beijing.

At noon last Thursday, the family spent some time having fun on two islands and got back on the boat at around 4pm, together with other tourists.

The sky darkened about 10 minutes after the boat left the pier, but Mr Zheng didn't worry too much. 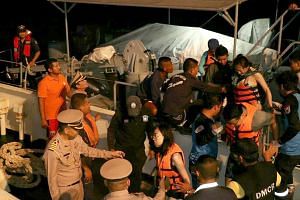 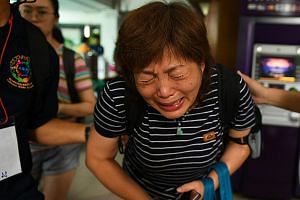 Boat capsizes in rough seas off Phuket, one dead

Half an hour later, the boat started shaking violently. He asked somebody where they were and found out that the boat had been in the same spot for the past half-hour.

Suddenly, the boat began listing heavily and he heard someone yell "Get out"! He quickly pulled his wife to the side of the vessel without thinking too much.

"It was rocking crazily and my wife fell down. Her knee started bleeding and I was in a panic," Mr Zheng said. "When we were about to jump overboard, she said 'Don't drag me' because of her injured knee and I said 'OK'. All of a sudden, the boat turned flipped over and I was in the sea."

"I could never imagine that the conversation was the last words between us. I grabbed a rope after I fell into the water, and when I raised up my head to look for my wife, the whole boat was missing."

About 20 tourists, including Mr Zheng, eventually climbed aboard a rubber raft.

"There were no words between any of us in the rubber boat. All of us were stunned. We could only hear the sounds of the sea."

Mr Zheng said if they had known there would be a big rubber boat floating around after their boat sank, they might have first put on life vests and jumped in the vicinity to be saved.

"However, we knew nothing about it. No one gave us any warnings or guidance," he said.

Mr Zheng said it is a tradition in his hometown that deceased children be dressed in long sleeves and trousers. He has prepared full sets of clothes for each of his family members who died in the tragic accident.

"I don't know what to do now. I can only wait in Thailand, dealing with their final arrangements."

Meanwhile, the number of tourists missing in the boating tragedy was lowered to six on Monday (July 9) after the passenger head count on the yacht Phoenix was revised.

Phuket Governor Naraphat Plodthong, heading the search and rescue operation, told reporters that six tourists remained unaccounted for, although one body had just been found under the yacht’s hull at the bottom of the Andaman Sea near Koh Hae.

The governor said a more thorough cross-checking of information had revealed there were 89 tourists on board the ill-fated yacht – two Europeans and 87 Chinese.

The governor said confirmation was awaited as to the identities of the five survivors.

He said the search had not yet begun for the six missing, but meanwhile divers had noticed the body pinned beneath the hull.

Vice Adm Somnuek Prempramote, commander of Naval Area 3, said his men and other divers were preparing to retrieve the trapped body on Monday.

The operation would require the use of sand-injection equipment to raise the boat slightly, he added.