MANILA (AFP) - Geraldine Roman on Tuesday (May 10) celebrated overcoming "bigotry, hatred and discrimination" as results showed she had become the first transgender politician to win a congressional seat in the predominantly Catholic Philippines.

After her victory in Monday's election, Roman, 49, is being seen by the lesbian, gay, bisexual and transgender (LGBT) community as a source of hope in a country where Church influence means divorce, abortion and same-sex marriage are banned.

"The politics of bigotry, hatred and discrimination did not triumph. What triumphed was the politics of love, acceptance and respect," Roman told AFP after her victory for a seat in Congress representing the farming province of Bataan just northwest of Manila. 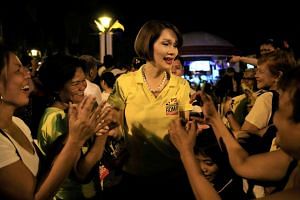 Roman, a Catholic, said she was looking forward to becoming a lawmaker so she could respond to critics who dismissed her as a one-issue politician not to be taken seriously.

"I'm elated, very, very happy. I'm also excited to work. I realise that the burden is bigger because the stereotype of people about the LGBT is we are frivolous, that we have nothing substantial to say, so I have to prove them wrong," she said.

Roman will be the highest-ranking openly LGBT politician in the Philippines, where other lawmakers have refused to come out for fear of losing support from the Catholic Church and other religious groups.

A political neophyte, Roman will succeed her mother as representative of Bataan, where her family has been a political force for three generations. Her mother had to stand down after serving the maximum number of three terms.

Roman's father was a former congressman whose death in 2014 prompted her to consider continuing the family legacy.

Political families dominate Philippine politics, from the local to the national level, and belonging to such a dynasty was widely regarded as being crucial to Roman's success.

Still the constituents of Bataan overwhelmingly endorsed Roman, with the vote count showing she had secured 62 per cent support.

"She is also a human being. We all have rights. It's not an issue to me that she is transgender," farmer Bern Salenga, 49, told AFP during a campaign sortie in Roman's home town before the election.

Roman has been living as a woman for two decades, and proudly wore a pearl necklace and pink lipstick while campaigning.

She had a successful career as senior editor at the Spanish News Agency. She speaks Spanish, French and Italian and won a scholarship to study in Spain, where she met her partner of 18 years.

She underwent sex reassignment surgery, and legally changed her name and gender, in the 1990s - a recognition she wants other transgender people to have.

In 2001, a law was passed making it impossible for transgender Filipinos to change their name and sex.

Roman has vowed to campaign to lift those restrictions, and to push for an anti-discrimination bill that ensures equal treatment in the workplace, schools, commercial establishments and government offices.

Despite the focus on her gender, Roman said her priority was the people of Bataan, and to help more poor students nationwide get scholarships.

"Equality (is) not only in terms of gender but also in terms of socio-economic status. To be rich or poor should not matter. Whether educated or not, people should have the same opportunities so I'm going beyond gender to include more issues," she said.

With her historic victory, Roman said she hoped more LGBT Filipinos would be inspired to join government.