BORACAY (REUTERS, AFP) - The Philippines reopened its top holiday island Boracay on Friday (Oct 26) and promised sustainable tourism and a greener environment, welcoming back visitors after a six-month clean-up order by President Rodrigo Duterte to mend decades of harm caused by unchecked tourism.

The white sand idyll was closed to visitors in April after Duterte called it a "cesspool" tainted by raw sewage flowing from hotels and restaurants straight into the sea.

Hundreds of excited local and foreign tourists barred from Boracay since April trooped to a jetty serving as the main gateway to the 10-square-km island, which is famed for its sugary white sands, turquoise waters, lively nightlife and abundant water sports.

“We have already done the first phase, this is the rehabilitation. There is no more cesspool,” environment minister, Roy Cimatu, told a news conference.

But the island is now turning over a new leaf.  Beach parties are now banned, as is smoking and drinking. Along the shoreline, there will be no more vendors, masseuses, fire dancers or watersports, and the scores of moored boats for years a fixture on the beach have been forced to anchor elsewhere.

Only 19,000 tourists will be now be allowed on the island on any given day, with the number of workers capped at 15,000 daily.

“When we think about it, our problem is everybody wants to go to Boracay,” Tourism Secretary Bernadette Romulo-Puyat told reporters on Friday.

“Manage your expectations. The front is beautiful, the water is pristine and clear, but of course the roads are still being built,” she added.

The government plans to extend its restoration beyond Boracay to other tourist spots on the archipelago of over 7,000 islands, she said.  Prior to the closure, authorities found about a third of the 600 to 700 resorts on Boracay were operating without permits. 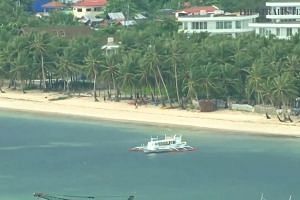 Some 157 hotels offering 7,308 rooms were allowed to operate starting Friday.

Tourists arriving on Friday were greeted by, rubble, excavators and partially-knocked down buildings along roads, but there were flashes of Boracay’s idyllic past for years obscured by crowds and commercial activities.

"Even if there are many renovations and it's not yet perfect, when you go to the beach, you realise that closing it for six months was worth it," said 30-year-old tourist Roan Tadle from Manila.

All water sports save for swimming are also banned for the time being, while Boracay's three casinos have been permanently shut down in line with Mr Duterte's wishes.

Nearly 400 hotels and restaurants deemed to violate local environmental laws have already been ordered closed, and airlines as well as ferries were told to restrict service to the area.

The Boracay Foundation, the main business industry group on the island, has not commented on the restrictions but welcomed the return of tourists.

"Everyone, big and small, has sacrificed a lot during the six-month (closure)," its executive director Pia Miraflores told AFP.

Tens of thousands of workers were left unemployed when the island's tourism machine was deprived of visitors.

"Life will go back to normal. We will have money and work again," said Mr Jorge Flores, 45, a hotel worker. "In the past six months, hotels here were like... a ghost town."

Other places in the region strained by mass tourism have also used closures as a tactic to protect the sites from destruction.

Thai authorities announced in October that Maya Bay, the glittering bay immortalised in the movie The Beach, will be closed indefinitely to allow it to recover from the impact of hordes of tourists.