MANILA - The Philippines foreign ministry said on Monday (Sept 25) it held "deep respect" for a decision by Kuala Lumpur to disassociate itself from a statement issued by the Philippines, as Asean chair, on the unfolding crisis in Myanmar.

Malaysia had described the Asean chairman's statement, issued on Sunday (Sept 24), as having "misrepresented the reality of the situation" and "was not based on consensus".

But Manila said on Monday that the statement by the Philippines, as Asean chair, "also has to respect and take into account the sentiments of the other members" of Asean.

It said Kuala Lumpur's dissent was the reason why the ministers decided to issue a chairman's statement "that would reflect the general sentiments of the other foreign ministers", rather than a joint communique.

The ministry said there were "extensive consultations" with Malaysia.

"The Philippines as chair tolerates the public manifestation of dissenting voices," it said.

"This demonstrates a new level of maturity on how we implement Asean's consensus principle when confronted with issues affecting national interests." 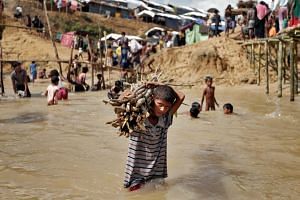 Asean ministers condemn 'all acts of violence' in Rakhine

The Sunday Asean statement by Philippine Foreign Secretary Alan Cayetano expressed concern over violence that began when the Arakan Rohingya Salvation Army attacked about 30 police posts and an army camp in Rakhine, killing about 12 people, on Aug 25. 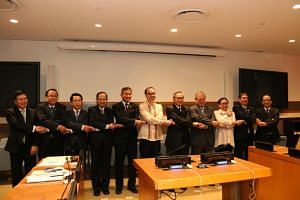 Mr Cayetano said Asean's foreign ministers condemned the attacks against Myanmar's security forces, as well as "all acts of violence which resulted in loss of civilian lives, destruction of homes and displacement of large numbers of people".

The ministers also "urged all the parties involved to avoid actions that will further worsen the situation on the ground", and pushed for "viable and long-term solutions to the root causes of the conflict".

Datuk Seri Anifah said the statement did not identify the Rohingya as one of the affected communities.

The United Nations has described as ethnic cleansing a sweeping government offensive in response to those militant attacks.

More than 430,000 Rohingya have fled the region to Bangladesh in under a month, telling stories of Myanmar soldiers teaming up with vigilante mobs to slaughter civilians and burn entire villages to the ground.

Around 30,000 Hindus and Buddhists based in the area have also been displaced by the violence.