MANILA (DPA) - The Philippines on Tuesday (Feb 26) protested against a Washington Post story about the killings in the government's anti-drug campaign, alleging that it was meant to discredit the country.

"We take strong exception to the article entitled, 'This is Manila', that appeared on the front page of the Washington Post on 25 February 2019," the Philippine Embassy in Washington said in a statement.

"It is disappointing how this article hides behind the guise of journalism to advance an agenda that seeks to discredit the Philippines in the eyes of the international community," it added.

The Washington Post article centres on the unsolved killing of a 44-year-old jobless Filipino man whose body was found floating under a bridge in a slum community in Manila.

He was one of thousands of people killed in the Philippines since President Rodrigo Duterte came to power in 2016.

While some of the deaths are not confirmed to be related to Mr Duterte's anti-drug campaign, the Washington Post noted that "what connects them all is a kind of numbed silence".

"His is a portrait of one more life broken - and one more death left unexplained - in a city with many such stories," the article said. 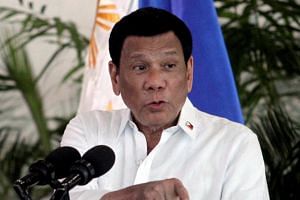 "Since President Rodrigo Duterte rose to power more than two years ago, the death toll from his war on drugs has kept climbing," it added.

More than 5,000 people have been killed in police operations under the government's crackdown against illegal drugs since 2016.

The New York-based watchdog Human Rights Watch said the true death toll in the drug crackdown, including victims of hired or vigilante killers, could be higher than 12,000, based on estimates by local rights and church groups.