MANILA (AFP) - Beach boozing and smoking will be consigned to the past when Boracay, the Philippines' top holiday island, welcomes back a capped number of tourists after its six-month shutdown, the authorities said on Wednesday (Oct 3).

Philippine President Rodrigo Duterte ordered the resort shuttered to visitors in April, after declaring years of unchecked growth had turned the white sand idyll into a "cesspool".

When hotel doors reopen on Oct 26, the island known for its party atmosphere will crack down on drinking and smoking on its beaches, while only 19,000 tourists will be allowed at any one time.

The rules are aimed at protecting the island's fragile ecosystem, where up to 40,000 beach-goers were unwinding on its sand and swimming in its turquoise waters at peak periods.

"We wanted the beachfront to be clean and to be occupied by tourists," Environment Undersecretary Sherwin Rigor said on ABS-CBN TV. "There are more people who want to engage in wholesome activities."

Before closure, the 1,000ha island drew two million tourists a year, pumping roughly US$1 billion (S$1.4 billion) in revenue into the economy.

The government said Boracay's closure contributed to a sharp slowdown in Philippines' economic growth in the second quarter, but Duterte said the cleanup was worth it. 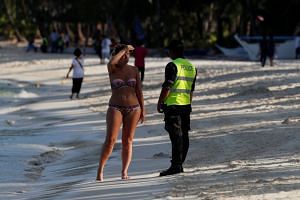 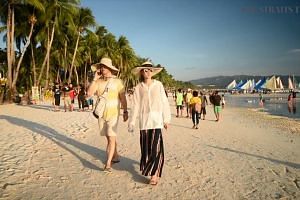 In the run-up to the reopening, bars, restaurants and hotels were being demolished to restore a 30m stretch of sand between the water and tourist areas.

This belt will be off-limits to drinking, smoking, weddings, vendors, and massage providers - activities which can be done inside hotels and restaurants, Rigor said.

The new rules are also set to ban the huge "Laboracay" multi-day beach parties attended by tens of thousands of tourists during the weekend that includes May 1, Labour Day, which is also the peak of the tourist season.

The government will only allow 6,000 hotel rooms, half the current total, with the rest seen going out of business for failing to comply with environmental and other regulations, the official said.

Boracay hotels are now required to put up their own sewage treatment plants, while garbage will be put on a barge every night and shipped across the sea to a landfill, Rigor said.

The Boracay Foundation, the main business industry group on the island, said it had no comment on the new rules which have not been officially conveyed to it.

"Other agencies usually consult with us and ask for our comments. So we are unsure yet if these are official or not," its executive director Pia Miraflores told AFP.

Another environment undersecretary, Benny Antiporda, told AFP all these rules will be enforced from Oct 26, but he did not rule out a compromise if the local businesses asked for it.

"They should take the initiative... Weren't they the same ones who destroyed Boracay in the first place?" Antiporda added.