MANILA (REUTERS) - Annual US-Philippine military exercises involving thousands of troops will be expanded for the first time to include other countries, with Japanese and Australian forces invited to join what will be the 34th edition of the war games.

The Philippines and the United States have been holding the "Balikatan" (shoulder-to-shoulder) drills annually to test the readiness of their militaries to respond to threats that include natural disasters and militant extremist attacks.

The United States embassy in Manila said in a statement on Thursday (April 19) that Australia and Japan, two US allies with strategic partnerships with the Philippines, would join the exercises taking place in multiple locations on the main island of Luzon, starting on May 7.

Britain has also been invited to observe training for the mitigation of post-disaster suffering.

The two weeks of exercises will focus on mutual defence, counter-terrorism, humanitarian assistance and disaster relief that can also "provide assistance in the event of crises that endanger public health and safety".

Soldiers from United States, Australia, Japan and the Philippines have already been renovating schools in four provinces north of Manila as well as providing medical and dental services in poor rural areas, the embassy said. 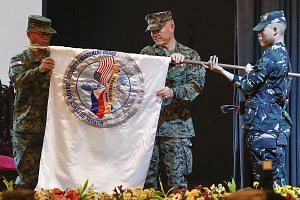 The exercises were scaled back last year in response to President Rodrigo Duterte's disdain for the US-Philippine defence alliance.

He has made no secret of his grudge against the United States and believes a US military presence of any kind in the Philippines puts his country at risk of being dragged into conflict, especially with China, as it beefs up its maritime defences.

The volatile leader has showered praise upon Russia and China and invited their warships to come to the Philippines for exercises too.