MANILA - Philippine security forces have rescued a senior Catholic cleric held for nearly four months by Muslim militants who have besieged the southern city of Marawi.

Father Teresito "Chito" Soganub, vicar-general of Marawi, was found abandoned by his captors at around 11pm on Saturday (Sept 16) near a mosque, hours after a deadly battle that saw the military seizing the militants' control centre, the government's chief peace negotiator Jesus Dureza said in a Facebook post on Sunday (Sept 17).

But Colonel Edgard Arevalo, the military's public affairs chief, said: "We are still validating that information. As of now, we cannot still give details. The rescue operation is still ongoing."

Military sources said Father Soganub had already been flown to Davao city, where he was set to meet with President Rodrigo Duterte.

Father Soganub was taken hostage along with about a dozen of his parishioners after hundreds of armed extremists flying the black flag of the Islamic State in Iraq and Syria (ISIS) stormed and occupied large parts of Marawi, the Islamic capital of the mainly Catholic Philippines, on May 23.

The priest had appeared in a video released by the militants pleading for his life and asking the military to cease their aerial bombardments. Photos showing him, a young man and a woman slumped against a wall had also circulated on the Internet.

Accounts from hostages who either escaped or were rescued said the militants had forced them to convert to Islam, carry wounded fighters to mosques, and the women to marry militants.

Security forces have engaged in ferocious street-to-street combat and launched airstrikes in their efforts to expel the fighters from Marawi, in a conflict that has raised fears that ISIS is looking to establish a South-east Asian base in the Philippines.

Col Arevalo said security forces retook at around 5pm on Saturday (Sept 16) the Bato Mosque and the Amaitul Islamiya Marawi Foundation building that the militants had been using as their control centre. 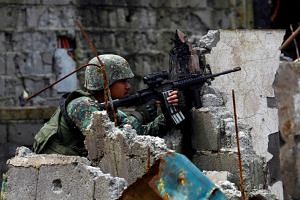 "It was a fiercely fought five hours before government security forces subdued the terrorists who were strategically located in the buildings," he said.

General Eduardo Ano, the military chief, said in a statement: "This enormous (military) gain further weakened the terrorist group by denying them their erstwhile command and control hub,"

"As follow-up and clearing operations continue, we expect the enemy to yield more previously occupied positions, but not without a fight," he said. "We are ready for that."

More than 800 militants, government troops and civilians have since been killed in the conflict, which has forced thousands to flee their homes and destroyed large parts of the once-bustling city.

President Rodrigo Duterte has deployed thousands of troops and imposed martial law across the southern third of the country to deal with the crisis, while the military has launched a US-backed air campaign against the militants.