MANILA (REUTERS) - The Philippine Supreme Court voted on Friday (May 11) to remove its top judge, whom President Rodrigo Duterte called an “enemy” for voting against controversial government proposals, citing violations in the way she was appointed.

But one opposition party said the ouster of Maria Lourdes Sereno, the country’s first woman chief justice, removed a shield against abuse of power in government and left behind a “puppet Supreme Court”.

By a vote of 8-6, the court granted the government’s petition to cancel Sereno’s appointment on the grounds of alleged violations in the appointment process.

“Maria Lourdes Sereno is found disqualified from, and hereby adjudged guilty of unlawfully holding and exercising, the office of the chief justice,” said court spokesman Theodore Te, who read out the decision.

Sereno is the first chief justice to be removed by her peers and the second top judge to lose the position after her predecessor was impeached for non-disclosure of wealth.

The court gave Sereno a deadline of 10 days after receiving a copy of its decision to explain why she should not be sanctioned for a number of alleged violations, such as “casting aspersions and ill-motive to the members of the Supreme Court”. 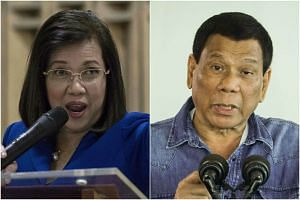 The messy fight between Duterte and his chief justice: Inquirer 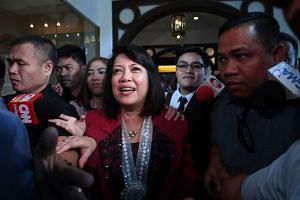 Sereno has denied any wrongdoing, and her spokesman said she would appeal the decision.

“It is a sad day,” Sereno's spokesman Jojo Lacanilao said in a television interview.

An hour after the decision, Sereno emerged from her office and urged her supporters to “defend the constitution and fight wrongdoing”.

“Let’s continue to spread the message of democracy and reason,” she said.

The scene outside the court in Manila was calm after the ruling. Crowds of supporters and opponents of Sereno had gathered outside the building before the ruling.

Senator Risa Hontiveros called it “a direct stab to the heart of our Constitution”, while her Akbayan party said the country was “a heartbeat away” from the death of its democracy.

“After having a lapdog Congress and a seriously wounded Senate, we now have a puppet Supreme Court,” the party said in a statement.

Duterte has made no secret of his dislike of Sereno. She voted against several of his proposals, such as extending martial law on a restive island and allowing late dictator Ferdinand Marcos to be buried in a cemetery for national heroes.

In October last year, Duterte dared Sereno to open her bank account to public scrutiny, accusing her of corruption and of being used by his political opponents.

Friday’s decision came before Congress, controlled by Duterte’s allies, returns from its Easter break next week to vote on an impeachment complaint against Sereno.