"Speaking personally for myself, I find those comments deeply troubling," Carter told reporters during a regional security summit with defense ministers from Southeast Asian partner nations, including the Philippines.

Duterte won elections in May after a campaign dominated by his pledge to eradicate drugs in society by killing tens of thousands of people.

In comments Friday, he drew parallels between his campaign to wipe out the drug problem and Adolf Hitler's genocidal drive.

"Hitler massacred three million Jews. Now there are three million drug addicts (in the Philippines). I'd be happy to slaughter them," Duterte told reporters in his home city of Davao. 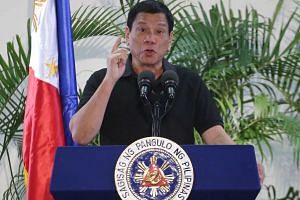 "At least if Germany had Hitler, the Philippines would have," he said, then paused.

"But you know, my victims, I would like to be (sic) all criminals to finish the problem of my country and save the next generation from perdition." Duterte this week also said he would soon end joint military exercises with the United States, a symbolic blow to a military alliance dating back more than 60 years.