MANILA (BLOOMBERG) - President Rodrigo Duterte plans to order the termination of a longstanding military pact with the US, the Philippine Daily Inquirer reported, though the US State Department reiterated that relations between the nations remain strong.

The Inquirer report, citing presidential spokesman Salvador Panelo, follows Duterte's threat in January to end the agreement after Washington cancelled a visa for a senator who used to lead his drug war.

Such a move could upend the decades-long alliance as Beijing continues its rise as a military power from the contested waters of the South China Sea to nations across Asia. The threat hasn't been officially confirmed by the government. The US has been seeking to reassure allies in South-east Asia of its commitment to the region.

A State Department official said in an emailed statement on Saturday (Feb 8) that the US-Philippine alliance remains a cornerstone of US efforts to promote a free, open, and secure Indo-Pacific region, citing comments by Secretary Michael Pompeo and Pentagon chief Mark Esper on their visits to Manila last year.

The US alliance with the Philippines is its oldest in the region and remains as important as ever, the official said, without directly addressing the Inquirer report.

Duterte "has made threats in the past to scale down Manila's security relations with Washington, and he's never followed through," said Michael Kugelman, deputy director of the Asia Programme at Washington-based Wilson Centre. "The reality is that the Philippines may seek China's economic largess, but there's no substitute for the US defence umbrella."

Since becoming president in 2016, Duterte has repeatedly threatened to "break up" the South-east Asian nation's alliance with the US, while warming ties with China. He previously warned of cancelling military agreement with the US due to deferred aid.

Manila's Foreign Affairs Secretary Teodoro Locsin will be instructed to officially inform the US government that the South-east Asian nation will terminate the Visiting Forces Agreement, Panelo was quoted as saying by the Daily Inquirer. The pact sets the terms for US military personnel operating in the Philippines.

Yet, Philippine Defense Secretary Delfin Lorenzana said on Saturday that there are no official orders so far to Cabinet officials to notify the US on ending the military agreement. Panelo didn't reply to requests for comments. 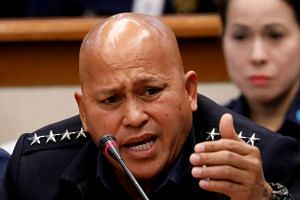 Locsin told a Senate hearing on Thursday that terminating the pact will "negatively impact" defence and economic ties between the two nations.

Esper said in November that the US remains committed to the treaty that binds it to aid the Philippines in case of an armed attack, adding that the pact applies to the South China Sea. He said at a media briefing that American forces are conducting more patrols to signal to China that it intends to maintain freedom in a crucial area for global trade.

Pompeo said last year that the mutual defence treaty with the Philippines would apply if its vessels or planes were attacked in the South China Sea.