MANILA (REUTERS) - Philippine President Rodrigo Duterte apologised to Myanmar leader Aung San Suu Kyi on Friday (April 13) for saying genocide was taking place in her country, saying his remark was a satirical barb at the West for not taking in Rohingya Muslims.

The United Nations and rights groups say nearly 700,000 mostly Muslim Rohingya have fled Myanmar into neighbouring Bangladesh since August, after attacks on security forces by Rohingya militants sparked a military crackdown that the United Nations has called ethnic cleansing.

Mr Duterte last week said the Philippines was willing to provide sanctuary for Rohingya fleeing what he called "genocide", a comment a Myanmar government spokesman said showed he had no restraint and knew nothing about Myanmar.

But in remarks aimed at Ms Suu Kyi, Mr Duterte clarified that and said he was not interfering in what he called Myanmar's "civil war".

"I will apologise to you, but if you have noticed my statement was almost a satire," he told reporters.

"I am not ready to intervene in your (internal affairs)." 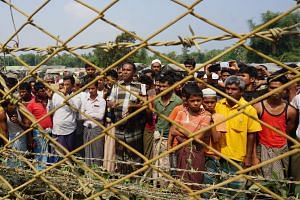 The Philippines and Myanmar are members of the 10-member Association of South-east Asian Nations (Asean), which has a rigid policy on non-interference in each other's affairs.

Mr Duterte, who brooks no criticism from what he sees as hypocritical western powers, said he was speaking against European countries which had accused Myanmar of rampant human rights violations, but did little to help the Rohingya.

"Do you have any plans of providing a safe sanctuary even for a moment for those who are really the victims of war?" he said, referring to European states.

He also urged them to provide "temporary relief" to the refugees and said he would do the same.

"I am ready to accept my share of responsibility in the name of humanity," he said.

There was no immediate response to request for comment from the Philippine Foreign Ministry.