MANILA (REUTERS) - Philippine police vowed on Monday (July 30) to revamp and intensify a fight against crime and drugs, a week after President Rodrigo Duterte promised no letup in a bloody crackdown that has alarmed the international community.

"Surgical and chilling will be the trademark of the reinvigorated anti-illegal drugs and anti-criminality campaign," police chief Oscar Albayalde told a news conference.

Thousands of suspected drug dealers and users have been killed in the past two years in what police say were shootouts.

Police have rejected accusations by activists that suspects were being systematically executed, based on weak intelligence and with the assumed backing of Mr Duterte.

Prosecutors of the International Criminal Court (ICC) have launched a preliminary examination to assess whether crimes against humanity may have been committed. Mr Duterte in March cancelled the Philippines' ICC membership in protest.

Director-General Albayalde said Mr Duterte's war on drugs would be"recalibrated", and there would be renewed focus and intensity, with "built-in safeguards" to ensure operations were lawful and protected human rights.

A police oversight committee would be formed, he said. 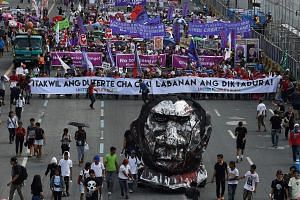 Duterte vows to keep up relentless war against drugs

The police chief warned of "frightful" consequences for anyone who continued to sell drugs.

He said police intelligence had identified 893 "high-value targets", warning that they and "their patrons and protectors" would receive a "strong message of the certainty of punishment".

Director-General Albayalde said nearly 1.3 million drug users and street peddlers had surrendered, and that they would be strictly monitored, including 215,000 who have undergone rehabilitation.

Philippine police have several times promised to overhaul the anti-drugs campaign, although human rights groups say there has been little noticeable change.