MANILA (AFP) - The Philippine parliament on Monday (May 30) proclaimed Rodrigo Duterte the nation's next president following his landslide election win this month, but he snubbed the high-profile event.

A joint session of the House of Representatives and the Senate in Manila endorsed the official count of the ballots, which saw Mr Duterte win by more than six million votes.

Mr Duterte declined to attend, remaining instead in his southern hometown of Davao. His refusal to attend broke tradition and disappointed even some of his supporters, reinforcing the foul-mouthed politician's reputation as a maverick who is happy to offend the political establishment.

"I am not attending the proclamation. I've never attended any proclamation all my life," Mr Duterte told reporters on the weekend in Davao, a city more than 900km from Manila that he has ruled as mayor for most of the past two decades. 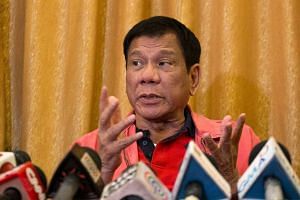 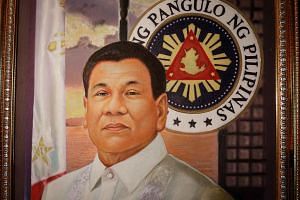 Duterte to skip Congress proclamation of him as new Philippine president

Mr Duterte, who won largely due to an incendiary law-and-order platform headlined by a vow to wipe out crime within six months, is due to be sworn in on June 30.

Mr Duterte pledged to give security forces shoot-to-kill orders, and vowed that tens of thousands of criminals would die. Since the election, Mr Duterte has repeatedly encouraged the police to kill drug suspects, and said he would bring back the death penalty.

Also on the campaign trail, he variously denied and acknowledged links to vigilante death squads in Davao, the biggest city in the conflict-plagued southern region of Mindanao.

Mr Duterte has promised to stay in Davao until his term starts, and has been holding midnight news conferences at various hotels. This has forced politicians, powerbrokers, business leaders and courtiers to fly from Manila for an audience.

He has also begun forming his Cabinet from Davao, naming many regional politicians to key posts. He has also met with communist and Muslim guerrilla emissaries ahead of planned peace talks.

Mr Duterte has said he wants to stay in Davao because he is comfortable there. He has also repeatedly expressed his disdain for spending time in Manila, which he described last week as a "dead city" that is overrun by slums.

At Monday's congressional session, Ms Leni Robredo was declared the winner of the vice-president election, narrowly edging out Mr Ferdinand Marcos Jnr, the son and namesake of the late Philippine dictator.

Ms Robredo, a member of outgoing President Benigno Aquino's Liberal Party, attended the event along with her family and supporters.

Highlighting the importance of the event to many in the Philippines, the ceremonies were broadcast live on national television.

In the Philippines, presidents and vice-presidents are elected separately. The Constitution limits them to serving a single term of six years.