MANILA (REUTERS) - A deadly church bombing that shook the southern Philippines at the weekend was a suicide attack carried out by an Indonesian couple, with the help of an Islamic State in Iraq and Syria (ISIS)-linked group, the Philippine interior minister said on Friday (Feb 1).

Citing information provided by witnesses and undisclosed sources, Interior Secretary Eduardo Ano said he was certain that an Indonesian man and wife were behind Sunday's attack on the mainly Muslim island of Jolo, which killed 22 people and wounded more than 100, including civilians and soldiers.

ISIS claimed responsibility for what it said were suicide bombings. Such attacks are almost unheard of in the Philippines.

Mr Ano's remarks are the latest twist in a probe that has been fraught with inconsistent and sometimes contradictory accounts from the authorities and, according to one investigator interviewed on television, complicated by a contaminated crime scene.

Security officials had initially said the two bombs were remote detonated, but by Tuesday, that changed after President Rodrigo Duterte said it may have been a suicide bomber, a view supported by his defence minister.

Defence Secretary Delfin Lorenzana on Friday said bag checks at the entrance to the church would have made it difficult to plant a bomb there, so a device strapped to the body was more likely.

"According to the forensic investigators... these body parts could belong to two persons: one inside the church and one outside," Mr Lorenzana told reporters. 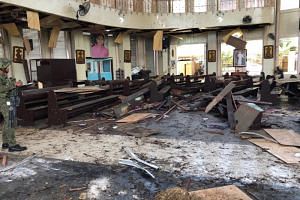 Mr Ano said the couple had received help from Abu Sayyaf, a militant organisation notorious for kidnappings and extremist factions.

He said those who plotted the attack would have been under the instruction of an operative he said had been recognised by ISIS.

The violence has rekindled fears about the extent of ISIS' influence in South-east Asia, and the lure of Mindanao for extremists from Malaysia, Indonesia and elsewhere.

Martial law has been in place in Mindanao since domestic and foreign fighters dressed in black outfits overran Marawi City in 2017 and clung on through five months of air strikes and street battles reminiscent of scenes in Syria and Iraq.

The latest violence follows a peaceful Jan 21 referendum that overwhelmingly approved autonomy for the predominantly Muslim parts of Mindanao, following a peace accord that excluded the Abu Sayyaf.

On Wednesday, two people were killed when a grenade was thrown into a mosque in nearby Zamboanga, a mainly Christian province. It is not clear who was behind it.