MANILA (REUTERS) - A Philippine lawyer who filed a complaint at the International Criminal Court (ICC) accusing President Rodrigo Duterte of murder in a bloody anti-drugs crackdown said on Tuesday (Jan 14) that he would no longer pursue the case.

The complaint filed by attorney Jude Sabio in 2017 is one of several communications to the court calling for Mr Duterte's indictment over thousands of alleged extrajudicial killings during his campaign against narcotics.

"I fervently request that it be expunged or erased from the record, and that it should not be used in any way in the ongoing preliminary examination," Mr Sabio said in a 28-page letter addressed to ICC prosecutor Fatou Bensouda.

Mr Sabio is the lawyer for Mr Edgar Matobato, a man who has testified in the Philippine Senate that he was part of a hit squad that operated on Mr Duterte's orders.

In his letter, Mr Sabio said the ICC case had been used by opposition politicians as a "tool for propaganda" and should therefore be "thrashed and set aside".

Former senator Antontio Trillanes, one of Mr Duterte's most vocal opponents, said the president's allies must have a hand in Mr Sabio's decision, saying it was an indication that they are worried about the ICC case.

There was no immediate comment from Mr Duterte's office.

Under ICC rules, a prosecution can still proceed after a submission is withdrawn by an external party.

While a complaint from a single, external party could alert the prosecutor to possible crimes, it would not in itself be the basis for a case. The prosecutor's office would initiate its own investigation to determine whether crimes under the ICC's statute had been committed and warranted charges.

In a December 2019 report, the office of the ICC prosecutor said it would aim to finalise a preliminary examination to enable it to reach a decision on whether to seek authorisation to open an investigation into the Philippines.

Mr Duterte has been dismissive of the ICC process. 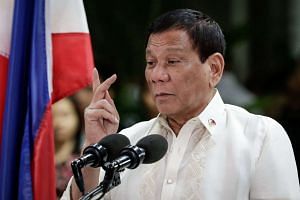 The firebrand leader unilaterally withdrew from the ICC's founding treaty in March 2018, saying it skirted due process and the presumption of his innocence and sought to portray him as a "ruthless and heartless violator of human rights".

Last month, he said he would refuse to cooperate if put on trial.