Ressa is the chief executive and editor of online news site Rappler, which has reported extensively on Mr Duterte's deadly anti-drugs crackdown that has claimed thousands of lives and which rights groups say may be a crime against humanity.

She has accused Mr Duterte of using prosecutions against her, including ongoing cases of alleged tax evasion and libel, to silence critics and intimidate the press.

She insists the site is not anti-Duterte, saying it is just doing its job to hold the government to account.

The journalist, together with six other current and former Rappler board members and editors, has now been accused of securities fraud.

Rappler said Ressa is abroad. The six others charged posted bail on the new charges on Wednesday.

Ressa, 55, and the six others were accused of allowing foreigners, through a 2015 bond sale, to take control of her media business.

Under the Constitution, the media is an economic sector which is reserved for Filipinos or Filipino-controlled entities. 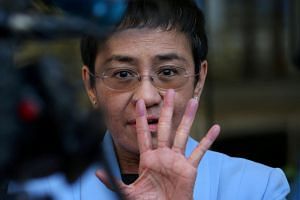 They were also charged with securities fraud over the bond sale, according to a statement issued to the press by a state prosecutor.

It said this allowed the buyer, a foreign fund, "to intervene in the management, operation, administration or control of Rappler Inc and Rappler Holdings Corporation".

Ressa's lawyer declined to comment on the fresh cases when contacted by AFP.

The country's corporate regulator revoked Rappler's business licence last year over the bond sale, but the site continued operating as it appealed the case in the courts.

Last month, Ressa spent a night in detention, but eventually posted bail for allegedly libelling a businessman in a news article written in 2012.

Ressa, who has Philippine and United States passports, was named a Time Magazine "Person of the Year" in 2018 for her journalism, and her Feb 13 arrest sparked international censure.