MANILA (REUTERS) - Around a thousand Catholics in the Philippines marched in Manila on Saturday (Feb 24) to protest President Rodrigo Duterte's bloody war on drugs and his efforts to reinstate the death penalty.

The protests come a day after students in the capital and provincial universities held demonstrations against Duterte, and a day before the 32nd anniversary of the "People Power"revolution that drove dictator Ferdinand Marcos into exile.

Catholic devotees prayed the rosary and sang hymns as bishops and the Philippines' own cardinal read sermons against what they say are not "pro-life" policies in the government.

The protesters carried banners and placards with the massage"Protect and Defend the Sanctity of Life and Marriage," "End Impunity" and "Stop the Killings."

Despite criticism of the Philippine leader's bloody war on drugs campaign, Duterte remains wildly popular and a trusted public official in the South-east Asian nation.

The Social Weather Station's (SWS) latest quarterly poll shows Duterte's trust rating bounced back to "excellent" in December from "very high" three months before. Another survey by the privately-run pollster gave his government the best rating so far for a Philippine administration since surveys started in the 1980s. 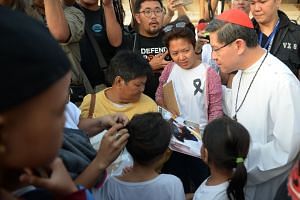 The majority of the Philippines' 105 million people are Catholic. Despite the popularity of the anti-drugs crackdown, some sectors of the church have become increasingly vocal on the drugs killings, with the church calling for justice and offering sanctuary to drug users.

"The threat is still there. We still hear news of extrajudicial killings. And still the bill of the death penalty is in Congress," said Broderick Pabillo, Manila auxillary bishop.

More than 4,000 suspected drug dealers have been killed since Duterte took office in June 2016. Police said the killings resulted from self-defence during raids and sting operations.