SHAH ALAM (THE STAR/ASIA NEWS NETWORK) - Dr Mahathir Mohamad has admitted that he was a "dictator" during his 22-year rule in Malaysia and was partly at fault for pushing Mr Najib Razak as Prime Minister.

He said this at a press conference after the "Save Malaysia" congress on Sunday (March 27). The former premier was asked how the appointment of a new prime minister would change the political situation.

Dr Mahathir explained that regardless of who replaces Mr Najib, they would know what would happen if they abused their power.

"They can do what I did, I was also a dictator before, but that is all right. People did not demonstrate like this against me before," he said in a jest.

Dr Mahathir added that he was not entirely at fault for the damage done by the current leadership. 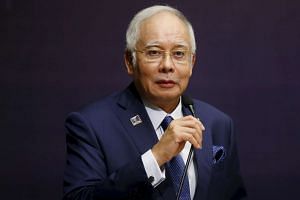 "The fault began with Tun Razak for recommending me to Tun Hussein, and then Tun Hussein for choosing me as his deputy. And I got elected as prime minister.

"As a prime minister, I have to choose my deputy. It was (Datuk Seri) Anwar (Ibrahim) followed by Tun Abdullah Badawi.

"I was responsible for asking Tun Abdullah to appoint Najib, so not only me. A lot of people were involved in choosing him. So it is my fault and other people's fault," he said.