GEORGE TOWN - A Penang official who called on Malaysia to rope in Singapore to seek Unesco recognition for hawker culture is now suggesting that his country make the bid alone.

Penang's Tourism Development and Heritage Committee chairman Yeoh Soon Hin told reporters on Thursday (May 9) that Singapore hawker fare is not "so authentic" as every hawker stall is under the government's control, Malay Mail reported.

"From my perspective, we should submit a nomination for Malaysia's hawker culture to include other states such as Ipoh, Melaka and Kuala Lumpur, not only Penang," he said.

He added that the final decision lies with the National Heritage Department as it is the authority responsible for submitting Malaysia's nomination to Unesco, the cultural agency of the United Nations.

Mr Yeoh told a state legislative assembly last Thursday that a joint bid between Singapore and Malaysia to list hawker culture under Unesco as an intangible cultural heritage is more likely to succeed as Unesco encourages joint bids between countries.

His proposal, coming after Singapore had submitted its own nomination for hawker culture in March, drew mixed reactions on social media.

Facebook user Jasmine P'ng Siok Lee pointed out that the food culture of Singapore is different from Malaysia's. 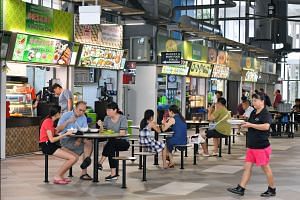 "We have moved on from stalls on streets to air-conditioned foodcourts. Our food culture is a lifestyle thing now. But Malaysia's hawker scene is still in the streets, barely changed from the 50s," said the user.

But another netizen Daryl Li felt that the street foods in the two countries are largely the same.

"You actually have an easier chance by applying together rather than submitting the application separately and letting the organisers laugh their socks off seeing two countries promoting the same thing in this world," he wrote.

"Remember once a thing is not exclusive it is very hard to get Unesco's attention."

There are also others who saw the humour in the possibility of a joint bid.