GEORGE TOWN (BERNAMA) - Landslides at hill slope projects in Penang's Tanjung Bungah have been highlighted to the Penang state government since early this year, according to Penang Forum.

Penang Forum member Lim Mah Hui said the first case was highlighted by Penang Hill Watch (PHW) in January and the second in May.

"Photographs of construction and hill cutting on this site were presented to the state government to which it responded that the 'earthworks were under monitoring'.

"On the second report,  we followed up closely but did not get any response from the state government," he told a press conference on Sunday (Oct 22 ).

The Penang Forum started the PHW, a citizens' initiative to provide the state government, information on hill cutting that it collects from the public.

On Saturday, seven construction workers were killed and four others are feared still buried after a massive landslide occurred near the construction site of a 50-storey affordable housing block in Lengkok Lembah Permai, Tanjung Bungah.

Search and rescue operations are still underway and police believe the victims were buried up to a depth of 10 metres. 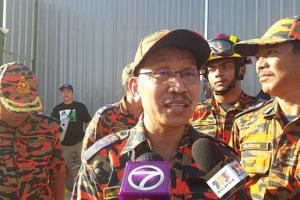 "The consequences are painfully evident today after an estimate of perhaps 11 lives could be lost in this tragedy," he said.

"The question is what happened then? Did the state and local governments follow through on their guidelines? Or was there gross negligence?," he said.

meanwhile, Barisan Nasional is tabling a motion in the coming state assembly to halt all hillslope projects until an inquiry is completed.

Pulau Betong assemblyman Datuk Dr Muhammad Farid Saad said Barisan had submitted the motion to the State Speaker's office and hoped it would be accepted.

"Developers should be patient for two to three months, stop their work until the full inquiry report is produced," he said when visiting the site of the landslide in Tanjung Bungah on Sunday (Oct 22).

He urged assemblymen from DAP, PKR and PAS not to object to the motion.

"This is a very important motion, a rakyat's motion which needed the support of all," he said.

State opposition leader Datuk Jahara Hamid said the motion is to ensure that no hillslope projects in areas which might endanger people be allowed to continue.