GEORGE TOWN (THE STAR/ASIA NEWS NETWORK) - Penang is facing serious water pollution issues, both on the island and the mainland.

The sea off Teluk Bahang is said to be contaminated by heavy metals while in Nibong Tebal, the water at the Sungai Tengah river mouth is black, a problem fishermen there claim has been plaguing them for about 10 years.

The situation in the north of the island looks far more serious. Weeks ago only a few fish were found dead. Now, fish are dying by the thousands.

This has deprived fish breeders of their source of income as thousands of ikan kerapu (grouper) are dying in fish cages.

"We use to sell about 500 kilograms of fish at markets and restaurants during the Chinese New Year and about 100kg at normal times," said breeder Lim Suan Gian, 64, at his farm in Teluk Bahang.

"However, we only managed to sell about 40 to 50kg over the last two months as most of them ended up dead.

"We are baffled. The Fisheries Department took samples of the dead fish several times but as of today, there has been no indication of what caused the deaths," Lim said, adding that he suffered losses of about RM130,000 (S$42,670) since April. 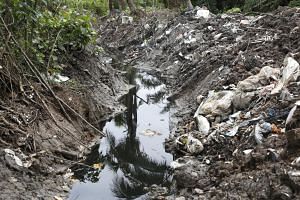 "Both Lim and I have made five police reports as we have no other income and are not be able to service our bank loans," Ooi said.

He said the dead fish at the farms would have to be thrown away while those that were still alive would remain in the cages.

"We have stopped sending our fish supply to customers since April," he added.

A check by The Star saw a white foam on the water surface surrounding the five fish farms.

There was also the spread of algae blooms in the vicinity.

"We are not experts but the blackish sea water is not oil or mud, as fish would not die because of that," said breeder Wong Tien Swee, 37.

"The Department of Environment (DoE) and the Fisheries Department must find a solution fast before the entire aquaculture industry in this area goes under" he said.

"Now, I have to tell them their investments are in jeopardy," said Wong.

Fisheries Department director Noraisyah Abu Bakar said she had written to the Agro Bank, requesting it to extend the date of Ooi's monthly instalments.

"I understand the predicament of the fish farmers," she said.

"We have sent samples to our lab but it will take some time before we can determine the cause of death," Noraisyah said, adding she could not confirm if the fish are safe for consumption until then.

Noraisyah added that she was also working closely with Professor Datuk Dr Aileen Tan, director of the Centre for Marine and Coastal Studies (Cemacs).

Prof Tan was the first to discover the high levels of nickel contamination in the seas of Teluk Bahang.

"We just can't conclude that it was nickel as the DoE needs to confirm the source," said Noraisyah.

"It would be premature for now to confirm if the fishes were killed due to nickel poisoning."

Cemacs had reported that the level of nickel was 1,038 per cent more than it should be in the seas near the National Park and 982 per cent higher at the fish farms in Teluk Bahang.

Two weeks ago, Prof Tan said that the Universiti Sains Malaysia's Chemistry Department discovered nickel in the waters off Teluk Bahang at 0.472 parts per million (ppm), 944 per cent more than the standard 0.005ppm in typical sea water.

She said lead was found at 184 per cent above normal while cadmium was 32 per cent higher.

State Environment Committee chairman Phee Boon Poh said there were no reports of fish dying or swimmers being affected by the pollution and the DoE was monitoring the situation.

"We will know the main cause of the issue and the source when the results of tests have been released," he said.