HANOI (VIET NAM NEWS/ASIA NEWS NETWORK) - A male patient sang as he underwent an operation on his brain tumour while fully conscious, the first such procedure in Vietnam.

During the six-hour operation, the man was awake for two hours, singing the Vietnamese national anthem and popular sing-a-long Nhu Co Bac Ho Trong Ngay Vui Dai Thang (As If Uncle Ho Were Here In The Joyous Day Of Great Victory).

According to Associate Professor Dong Van He, deputy director of the Viet Nam-Germany Friendship Hospital in Hanoi and head of the hospital's neurosurgery centre, the patient is 36-year-old Nguyen Trung K., a businessman in Hanoi.

Starting at the beginning of last year, K. randomly experienced headaches of mounting frequency and intensity, but he kept working as usual until the pain culminated in epilepsy-like seizures.

After the second episode, his family brought him to the Viet Nam-Germany hospital where he was diagnosed with glioma, one of the most common forms of brain tumour. Glioma develops in the brain and starts in glial cells that support and protect the nerve cells.

The condition typically causes abnormal pressure inside the skull, resulting in headaches, nausea, blurred vision, a reduced sense of smell, unusual hormone levels or even partial paralysis and behavioural disorders.

In April, K. underwent a conventional operation to have his tumour removed but it proved too large (up to 6cm in diameter) and located too close to the brain's functional areas that govern motor skills and language. The doctors decided they could not risk taking out the entire tumour for fear of rendering the patient mute and paralysed. 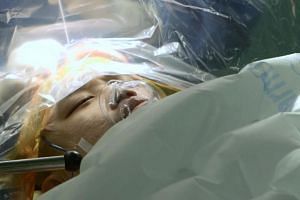 He went through brain surgery - awake

Coincidentally, the hospital had already planned to conduct an awake surgery and sent doctors overseas to study the method. In June, the hospital invited two Japanese doctors, surgeon Kotoe Kamata and anesthesiologist Takashi Maruyam, to Viet Nam to review whether the hospital was ready to implement the technique.

Aside from proper facilities, medical equipment, skilled doctors and a thorough grasp of the procedure, the patient needed to be able to communicate in English to talk directly with the doctors during the surgery without interpreters.

After half a year of preparation and looking for the right patient, on Monday (Jan 28) morning, the two Japanese doctors carried out the surgery on K. as a live example for Vietnamese doctors.

The operation commenced at 10am and lasted for six hours. K. was unconscious under anesthesia for two- thirds of the time so the doctors could work on the tumour cells located in non-critical areas.

"During the surgery, the patient conversed normally with the doctors," Dr He told the press during a briefing on Tuesday (Jan 29).

"The patient was asked to count from one to 10, answer basic questions about his name, family and work, and perform basic movements like lifting his arms and feet. He was also asked to sing a few songs in succession."

The conventional anesthesia method would be quite dangerous in K.'s case because the doctors would not be able to gauge whether (or how much) their work was changing the speaking and motor skills of the patient.

With the patient conscious, the doctors could stop and intervene in time if they notice something going awry.

Dr He said this method did not cost more than putting the patient under conventional anesthesia, but it is more difficult because it requires smooth collaboration between the surgeons, the anesthesiologist and the patient. The anesthesiologist must calculate the right dose so the patient would be unconscious only while doctors treat the non-critical areas.

"The patient must remain calm during every step," Dr He said. "If the conscious patient panicked and struggled and thrashed about, especially when the skull is open and being worked on by the doctors, the brain could be dislocated and the risks are unimaginable."

Dr He added that the patient had watched several videos of similar operations done in foreign countries to prepare.

The surgery was a success and K. was alert and in good health afterwards, with no sign of complications.

Awake surgery is no longer a novel concept in countries with developed medicine. For example, Japanese doctors have had 20 years of experience with the procedure, according to Dr He.

In the near future, similar procedures will be implemented and undertaken by Vietnamese surgeons.