PASIR GUDANG - Three days after the second round of air pollution to have troubled Johor's Pasir Gudang, students of three schools around the district suffered breathing difficulty and vomiting.

Thirteen-year-old Kasih Sofea Mohd Zull Ihsan, of SMK Taman Nusa Damai, told The Star that she and her friend detected a weird stench during recess at about 10am.

"I had difficulty breathing, a headache, and was coughing profusely," she said. "Our teachers then told me and other students who were sick to gather at the school's foyer before we were taken to an ambulance," she told the newspaper when met at the stadium.

Another student, Zareen Farisha Zulkiflee, also 13, said she felt extreme discomfort in her eyes and throat as she was leaving her classroom for recess. "Then I found it hard to breathe," she said.

"My friends WhatsApp-ed me some photos about people from the school next door getting ill and just then, my wife too felt unwell," he said, adding that his wife found it hard to breathe and developed leg cramps as they were about to enter their car, which was parked near SMK Taman Nusa Damai.

All kindergartens, schools and institutions of higher learning in the Taman Mawar area of Johor's Pasir Gudang have been ordered to close until Thursday as the authorities investigate the cause of the air pollution. 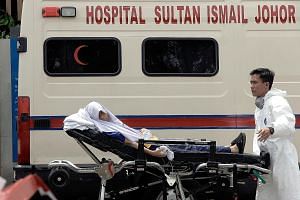 The Johor government said on Sunday that it was still not known what had caused the incident, and an investigation was under way. Johor Menteri Besar Sahruddin Jamal said that the authorities hoped to get a clearer picture of what happened when it obtains the blood test results of those affected on Monday.

State Health, Culture and Heritage Committee chairman Mohd Khuzzan Abu Bakar said that as of 3.30pm on Sunday, 13 people had been referred to Sultan Ismail Hospital while another 49 received treatment at a temporary clinic at the stadium and health clinics around the area.

Last Thursday, about 15 students from Sekolah Agama Taman Mawar experienced breathing difficulty and vomiting, believed to have been triggered by air pollution.

This came just three months after a toxic pollution crisis in the Sungai Kim Kim river that resulted in over 4,000 people falling ill and the temporary closure of 111 schools in the Pasir Gudang district.

Four individuals, including two Singaporeans, have been charged in the Sessions Court for their alleged involvement in the case. Three of them are directors of a used tyre processing company and the other is a lorry driver.

The Department of Environment has said it will step up its monitoring of an illegal dumpsite in Pasir Gudang and conduct checks on the Sungai Kim Kim area again on Monday, Bernama reported on Sunday.

The department will also be employing drones and mobile air quality monitoring units, the department's director Wan Abdul Latiff Wan Jaffar said. Some 150 enforcement personnel are involved in the monitoring operations, which will be mainly focused on the area around the schools affected as well as nearby factories.