REUTERS (BLOOMBERG) - Thailand, a tropical paradise known as a place to let loose, these days is starting to get another reputation: as a low-cost option for foreigners looking to dry out.

While the South-east Asian country's fun-in-the-sun reputation has attracted more than 200 million visitors over the past decade, Thailand in recent years has become one of the world's top medical tourism destinations. Along with reasonably priced medical options, its warm climate and relatively cheap food and lodging makes it a prime destination for those seeking alcohol or drug recovery at hospitals or rehab centres.

The opioid epidemic in North America, the heroin crisis in Europe and methamphetamine use in Australia have led to waves of addicts seeking help. With months-long waiting lists in their own countries, tourists find booking a room at one of Thailand's rehab centres becomes a very attractive option, especially with the country's lenient visa guidelines.

About two hours north of Bangkok at the foot of the mountains in Saraburi province, the golden roof of a Buddhist temple stands out among the lush forest that surrounds it. The Thamkrabok Temple, or Wat Thamkrabok in Thai, is known for its 15-day drug rehabilitation program, during which patients project liquids through all orifices by vomiting, sweating and excreting. The cost for treatment? None. Patients must pay their own transportation there and for food, and vow never to do drugs again.

"You can't underestimate drugs," said the monastery's Vice Abbot Phra Ajahn Vichit Akkajitto. "That's why we must have them take a vow, live up to that vow and never break it because the vow will make them stronger."

The monks and nuns at the Thamkrabok Temple are in charge of growing, collecting and cooking the herbs in the temple's homemade medicines, and assigning chores to patients. The monastery has attracted so much attention for its remedies that more foreigners are seeking out treatment, said the vice abbot. While many patients return home, some of Vichit's foreign pupils have been ordained and stayed on at the monastery. 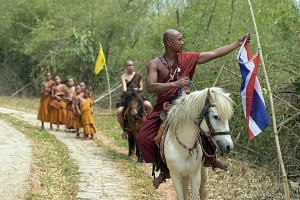 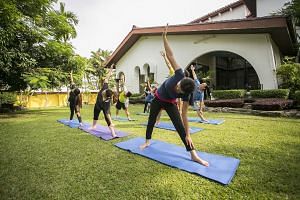 Other options are more in keeping with Thailand's reputation for lush resorts.

In the outskirts of the Northern city of Chiang Mai is The Cabin. Its 120 residences each have private pools, al fresco dining areas, gyms and clinics with mountain views. The Cabin boasts having had patients from more than 60 countries, and are specially catering to their Middle Eastern clientele with an Arabic program. They have also rolled out separate programs for the LGBT community and young male clients.

It is the country's most costly in-patient facility, though the expense is relatively cheaper compared with US counterparts such as the Betty Ford Centre or The Meadows, which charge up to US$67,750 (S$90,245) and US$54,300 respectively for their programs. The Cabin's starts at US$15,900 for a month's stay.

"Personally, I don't think that treatment can justify charging US$50,000 for a month," said Martin Peters, director of Lanna Rehab, another clinic in Chiang Mai.

The ease of getting a visa also is a factor drawing medical tourists to Thailand. Passport holders from a list of 55 countries can walk straight from the plane through immigration and are given at least a 30-day stay as a tourist.

Thailand last year earned up to 49 billion baht (S$2 billion) in revenue from such patients, according to Kasikorn Research Centre.

Lanna Rehab, a 24-bed luxury in-patient centre hidden away behind large rice paddy fields, promotes its price point. The centre was remodelled for rehabilitation from a resort. Lanna's co-founders, Martin Peters and Darren Lockie, greet their clients by name and ask about their progress as they walk out of their morning group therapy session.

"Thailand has a good reputation for the rehab space," said Lockie, also Lanna Rehab's managing director. "I think there's good opportunity for Thailand to establish itself as the rehab hub of Asia, or the world."