Adjacent resort city shuts down amid tremors; number of evacuees set to swell

Tagaytay, an upland resort city about two hours' drive south of the Philippine capital Manila, owes much of its prosperity to a small volcano that, while very active, has not really been a threat.

The volcano, Taal, sits on a small island inside a vast lake that partly fills a caldera formed thousands of years ago. It offers a picturesque view, especially along a long ridge in Tagaytay, which attracts both local travellers and tourists, and they, in turn, prop up the city's economy.

Since Sunday, however, Taal has forced Tagaytay to shut down.

In dramatic fashion, the volcano spewed a column of ash kilometres into the air that spread so wide that it blanketed metropolitan Manila, forced major airports to suspend operations, and closed down schools, offices and the stock market.

Tagaytay was hit especially hard. The city of more than 70,000 has had no electricity and running water since Sunday evening.

Roads leading to the city are caked with a layer of ash that vehicles are stirring up, forcing drivers to turn on their headlights at midday.

Yesterday, most of the city's restaurants and amusement parks were closed. Many guests at hotels and lodges have checked out, and are heading back to Manila.

Hordes of residents are flocking to malls and convenience stores to purchase provisions as they dig in and prepare for the long haul.

"We closed down at 8am when we lost power and because of the ashfall," Mr Julius Crisostomo, 29, a staff member at Vista Point, a cluster of restaurants in Tagaytay, told The Straits Times.

He said there are water tanks. "But without electricity, we can't run our water pumps."

A restaurant manager said the local utility company had sent out an advisory that the power cut would remain for at least a week.

Adding to jangled nerves, the city has been rocked by tremors every hour since Sunday. Mr Jay-Ar Barcelona, 26, said: "I couldn't sleep. It got especially bad early on Monday, at around 2am. My room was shaking so hard I thought the mirrors would break."

He said the ground shook three to four times an hour early on Sunday evening.

Ms Baby Ong, 62, said her husband, sister, two granddaughters and her have stayed out of their house since 8am yesterday because of the tremors.

"We were worried our house would collapse because the ground was always shaking," she said.

Ms Ong, who lives abroad, returned to the Philippines for a visit last October. The following month, she joined a hiking tour that took her to the mouth of the volcano.

"The water inside the crater was already boiling even then," she said.

Seismologists at the state-run Philippine Institute of Volcanology and Seismology (Phivolcs) have been monitoring Taal as early as March last year.

Still, they were surprised at how quickly the situation escalated on Sunday.

They kept the alert level at four yesterday, meaning a "hazardous, explosive eruption" is imminent. 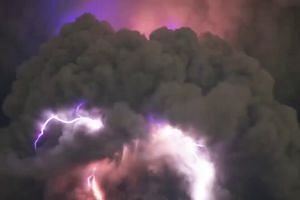 Ms Mariton Bornas, chief of Phivolcs' monitoring and eruption prediction division, told a news briefing that the eruption could be as short as three days or as long as seven months.

"Hopefully, it will be short because of the damaging impact a prolonged one will have on those in affected areas," she said.

Taal has erupted more than 30 times in the past 500 years. It last erupted in 1977. A sudden, violent eruption in 1911 lasted for just three days, but more than 1,300 people were killed when they could not leave the island on time. An earlier one, in 1754, lasted seven months.

For those in Tagaytay, waiting that long is not an option.

By mid-morning yesterday, residents and groups of police officers and road safety workers dispatched by the central government were sweeping ash off a highway leading to Tagaytay and scraping up centimetres of mud.

Fire trucks, ambulances and other emergency vehicles raced across the highway, heading for towns in need of supplies and provisions for those who have to be evacuated. Convoys of riders from the Singaporean-helmed motorcycle ride-sharing service Angkas could also be seen ferrying boxes of relief goods.

Staff at a restaurant that had to be shuttered kept themselves occupied by sweeping their carpark, as the Taal volcano continued belching out plumes of ash nearby.

Ms Mirabel de Lara, 22, said: "The ash turns into mud when wet. When it dries up, it hardens and you can't just sweep it. You have to scrape it off the floor."

In towns and villages nearer the volcano, the situation was even bleaker.

The National Disaster Risk Re-duction and Management Council reported that more than 25,000 people had been evacuated to safer areas.

Most came from Batangas province, which yesterday declared a state of emergency. Many had to walk through ankle-deep mud for several kilometres.

Some could not flee yet, while others were just refusing to leave.

Mayor Wilson Maralit of Balete town told DZMM radio: "Our people are panicking... because they want to save their livelihood, their pigs and herds of cows.

"We are trying to stop them from returning and warning that the volcano can explode again any time and hit them."

Officials expect the number of evacuees to swell, with hundreds of thousands more being taken out of harm's way.

Mayors of towns that are affected or receiving evacuees are asking the government to send more food and water, as well as additional troops and police.

Mayor Norberto Segunial of Santa Teresita town in Batangas said he has provisions for only 500 evacuees, but has seen more than a thousand seek shelter in his town.

"They came and had dinner, breakfast here. Now, we have run out of food and water. We have very limited resources," he told ABS-CBN News.

Large numbers of displaced villagers are worried about their homes, farms and cattle, and the uncertain future they face.

Ms Irene de Claro, a mother of four, said her father stayed behind in their village in Agoncillo town, in Batangas, while the rest of the family fled in panic.

"We don't know what happened to our house because the ash was up to our knees. It was very dark and the ground was constantly shaking when we left," she told Associated Press.

"Most likely, there is nothing for us to return to. We are back to zero."

A version of this article appeared in the print edition of The Straits Times on January 14, 2020, with the headline 'Panic grips many in towns near volcano'. Subscribe
Topics:
More
Whatsapp Linkedin FB Messenger Telegram Reddit WeChat Pinterest Print Purchase Article Copy permalink