Kuala Lumpur - The Malaysian police have obtained a fresh photo of one of two suspects involved in the killing of a Palestinian lecturer and believe that they are still in the country.

An image of one of the suspects was obtained after a high-powered motorcycle, believed to have been used as a getaway vehicle, was found abandoned near a lake in Danau Kota, Kuala Lumpur, about 2km from the scene of shooting.

"We have yet to identify them, but we suspect that they used a fake identity either when entering the country or when they were here," said Tan Sri Fuzi, adding that the authorities believe that the men had entered Malaysia sometime in late January.

On Saturday, Palestinian lecturer Fadi al-Batsh, 35, was gunned down as he was walking to a mosque near his home to lead dawn prayers. A total of 14 gunshot wounds were found on the engineering lecturer's body.

The suspects - two men wearing full-faced helmets - had waited 20 minutes on a high-powered motorcycle near Jalan Meranti before the attack, said the police.

Tan Sri Fuzi said: "It's not going to be easy to track them down as we believe they're using a fake identity. They might have changed their appearance... the suspect in this photo probably has shaven his beard and head. This is why we really need help from the public."

Although the killing appears to be "professionally done", he declined to comment on reports claiming that it was carried out by Israel's Mosad spy agency's trained assassins. The Israeli government had dismissed the allegation on Sunday. 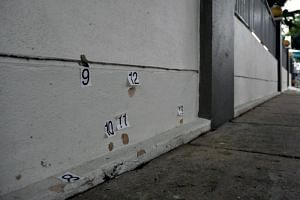 Shooting of Palestinian: KL police recover motorcycle believed to have been used by assailants

Some media have reported that the killed Palestinian lecturer, Dr Fadi, was a member of Palestinian militant group Hamas, but the Malaysian police declined to comment on this.

The Palestine News Network, based in the Palestinian Territories, said Israel had asked Egypt not to allow Dr Fadi's body to be taken back to Gaza, but the network said this was not under Israel's control as the Rafah border crossing between Egypt and the Gaza Strip falls under Egyptian sovereignty.

The network reported that Israeli Defence Minister Avigdor Lieberman had said that the request was in line with Israel's policy on preventing the transfer of the bodies of martyrs from the Hamas movement for burial in the Gaza Strip.