MARAWI (AFP) - After fleeing for their lives nearly a year ago, residents of the battle-scarred Philippine city of Marawi were allowed back on Sunday (April 1) for the first time - to dig through the rubble that was once their homes.

Swathes of the southern city were destroyed in five months of house-to-house fighting between troops and hardliners loyal to the Islamic State in Iraq and Syria (ISIS) that killed nearly 1,200.

Tearful residents dug charred furniture and broken toys from the ruins, which still conceals unexploded bombs dropped during the battles that broke out in May 2017.

"I cried in anger, pain," Ms Samsida Mangcol, 44, told AFP of the moment she saw what was left of her bridal boutique, which now has "I love ISIS" spray-painted across one its walls.

"I used to rent out clothes but now I have become a beggar asking my relatives for things to eat and wear," the mother-of-three said as she caressed a ruined wedding gown.

Marawi on Mindanao island, the principal Islamic city in the mainly Catholic Philippines, was besieged by hundreds of local and foreign gunmen waving black ISIS flags who attacked it in what authorities said was an attempt to establish a Southeast Asian base.

Over the course of the next month groups of residents will be allowed to return for up to three days each, to view their old homes and salvage what they can before rebuilding starts. 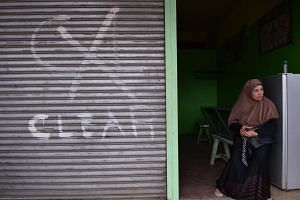 The fighting is over, but returning home is a long way off for many of Marawi's residents 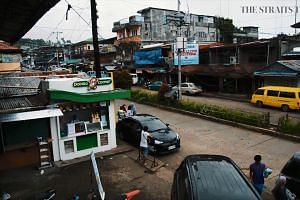 On Sunday, some 7,000 people walked forlornly through streets littered with rubble, twisted metal and the skeletons of bullet-riddled cars.

"Our house was still new when we left it. We had prepared everything for Ramadan (the Islamic fasting month)," said Ms Maimona Ambola, a 44-year-old mother of seven.

"A bomb has destroyed it all. Our bed has turned into ashes."

The battle, which ended in October, was the biggest security crisis under firebrand President Rodrigo Duterte.

Many of the city's 200,000 residents fled their homes in a rush for safety, including more than 10,000 people from the so-called "ground zero". They have since been living in evacuation centres or with relatives in other towns.

Months after the fighting ended, residents still visited at their own risk.

The conflict zone has 53 unexploded bombs from military airstrikes weighing as much as 226kg as well as explosives left behind by the militants, according to Colonel Romeo Brawner, deputy commander of the military task force in Marawi.

"We lack the equipment to excavate the bombs. One bomb we recovered, for example, took us five days because we had to dig 10 metres deep and 10 metres wide," Col Brawner told AFP, adding the military aimed to finish the effort by June.