"The law is not perfect. It is open to abuse, but you hope to find people who will not break the law, who will obey the rule of law. That is what is important," Tun Mahathir said in an interview with Malaysiakini.

The Official Secrets Act 1972 (OSA) allows the government to classify any document as secret and jail those who release such information for up to seven years.

The law has long been considered a tool to enable the government to keep its affairs opaque - or worse, to cover up its scandals.

Perhaps the most egregious use of the OSA was the previous Barisan Nasional administration classifying the auditor-general's report on the 1Malaysia Development Berhad (1MDB) scandal as secret, and sentencing Parti Keadilan Rakyat (PKR) vice-president Rafizi Ramli to 18 months' jail for releasing part of the report, according to Malaysiakini.

Mr Rafizi was later let off on a good behaviour bond after the prosecution, under the new Pakatan Harapan government, did not object to his appeal against the sentence.

Regardless, Dr Mahathir said the problem does not lie with the OSA per se, but with the government of the day - and gave his commitment that his administration would not abuse the law. 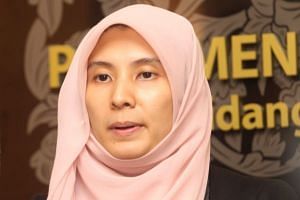 Malaysia's Freedom of Information Act to be formulated in stages: Nurul Izzah Anwar

"The last government did not follow the rule of law. They did what they liked with the law.

"The main thing is to find a government that will not break the laws," Dr Mahathir told Malaysiakini.

In its election manifesto, Harapan Pakatan promised to revamp the OSA with an accompanying Freedom of Information Act.

"The Pakatan Harapan government will revise the Whistleblower Protection Act 2010, the Official Secrets Act 1972, and the Witness Protection Act 2009, and we will make the necessary improvements.

"A Freedom of Information Act will be enacted, and financial provisions will be provided to implement this new Act," reads the manifesto.

While Dr Mahathir did not appear enthusiastic about the pledge when it was pointed out to him, he said it could be addressed, but nonetheless expressed reservations, said the Malaysiakini report.

"If you don't want to have OSA, we can (do it). (But) there will be no government because we are restricted, we cannot talk freely in the Cabinet because it will be known to the people.

"There are things we must keep secret... For example, if we tell everything we discussed in the Cabinet, a lot of us will be hammered, you see.

"We have to keep secrets, but you have to be open in the Cabinet - you have to speak out properly. If you don't speak out, then we make the wrong decisions," he said.

Though it appears unlikely that the OSA will be repealed, de facto Law Minister Liew Vui Keong indicated earlier this month that the OSA would be amended.

According to Mr Liew, the proposed amendments are aimed at addressing cyber and other emerging threats to state security.